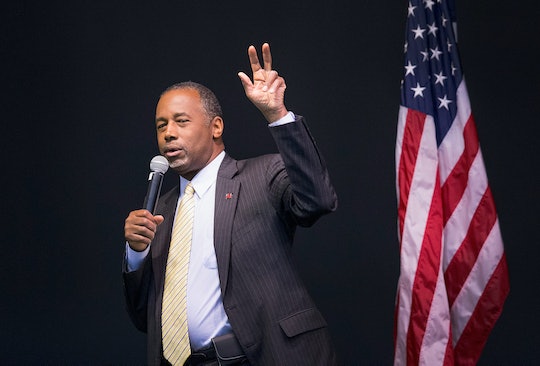 The fact that Donald Trump is running for president is shocking enough, right? Wrong. Donald Trump isn't just running — he's the top contender in the Republican Party, and it's something that's baffled some of his own party mates. But here we are, and this unlikely predicament has led GOP bigwigs to consider taking a drastic move to dethrone The Don. On December 11, Ben Carson threatened to leave the Republican Party if leaders decide to ignore voters and opt for a brokered convention.

Politico reports that Carson’s comments are a response to the claim that several top Republican National Committee (RNC) members are planning a brokered convention if Trump’s lead continues. For those who are unaware what a brokered convention is (don't worry, I had to look it up too), The Prospect explains that a party’s convention is “brokered” when delegates fail to determine a winner. From there, members are allowed to re-vote and negotiate until a clear candidate is selected. Seems ... diplomatic, right? Wrong, again. A brokered deal is hugely problematic for the GOP, and the Carson Camp believes this means that the voice of the voters will go undermined in favor of the will of a few — that few being Republican leaders.

In a statement released by his party, Carson said:

If the leaders of the Republican Party want to destroy the party, they should continue to hold meetings like the one described in the Washington Post this morning. If it is correct, every voter who is standing for change must know they are being betrayed. I won’t stand for it.

Carson added that if the claim is true, "Donald Trump won’t be the only one leaving the party."

He then issued a clear warning to the higher-ups in the RNC, noting that next summer's Cleveland convention could be his last with the Republican National Committee if the party tries to manipulate it.

I am prepared to lose fair and square, as I am sure is Donald. But I will not sit by and watch a theft. I intend on being the nominee. If I am not, the winner will have my support. If the winner isn’t our nominee then we have a massive problem.

Asked what he would do if the claim does come true, Carson did say he has no plans to run as an Independent, but did sneak in a sly "I’ll leave that up to you to speculate" comment. When Twitter caught wind of the news, it's pretty safe to say that not everyone was thrilled with Carson's decision. In fact, it reminded many of a move Donald Trump threatened to make days earlier.

He added: "If they don’t treat me with a certain amount of decorum and respect. If they don’t treat me as by far the frontrunner. If the playing field is not level, then certainly all options are open,” Trump said. “We’ll go through the primaries we’ll see what happens and I’ll make a determination.”

So looks like we've got two candidates, both looking to trump Trump.

More Like This
Even If Your Baby Sleeps Better in Your Bed, It’s Still Not Recommended
Marie Kondo Gives Up Tidying Post-Kids, Sparking Joy For Moms Everywhere
Soul Ties: What Does It Mean & How To Know If You Have One
Does The FDA's Plan To Limit Lead In Baby Food Go Far Enough?
What Parents Are Talking About — Delivered Straight To Your Inbox