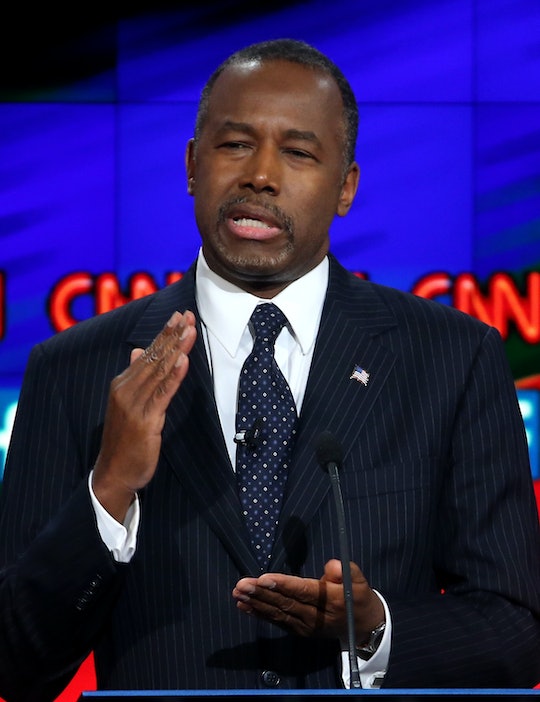 Ben Carson has had quite a fall from grace. An early favorite, constant jokes about the grain-storing pyramids or how he thwarted a robbery with a Jedi mind trick haven’t done any good for his campaign. As of Dec. 12, Carson was trailing both Donald Trump and Ted Cruz in the polls. So the stage was set at the Dec. 15 Republican debate for Carson to make some sort of comeback, re-energize his base, and attract new supporters, who he desperately needs. Ben Carson's closing statement at the CNN GOP debate was, in particular, a chance to leave voters with a strong sense that he's a better bet than Cruz or Trump and, for voters on the far right, the true Conservative in the mix.

Though he was recognized as an early frontrunner, Carson is slowly losing ground to Ted Cruz and Donald Trump — who are gaining more and more momentum. In the last six weeks, Carson has gone from 29 percent support to 11 percent, putting him in fourth place, according to a recent Wall Street Journal/NBC News poll. The Journal asserts that Cruz has garnered support from very conservative Republicans who previously backed Carson. CBS News points out that Carson probably lost groups like evangelicals and Tea Party Patriots after the Paris attacks, as he doesn’t stand out on foreign policy issues.

So did Carson channel that renewed energy into his closing statement at the GOP debate Tuesday night? Here's what he had to say.

I’ve been fortunate enough to travel through 58 different countries, and I thank God every day that I was boring in this country; the most exceptional country that the world has ever known. And I want to make sure that we preserve that exceptionalism for the next generation. My mother told me if I worked hard, and I believed in American principles, and believed in God anything is possible. I believe that is true, and that’s why I’m not anxious to give away American values and principles for the sake of political correctness.

Twitter wasn't terribly impressed with what Dr. Carson offered up:

Though he’s calling more shots as of late, Carson's closing statement didn't pack the punch it probably needed to turn his campaign around.

More Like This
Husband Of Massachusetts Mom Accused Of Killing Children Asks Public To Forgive Wife
6-Year-Old Boy Has Zero Regrets After Ordering $1,000 Worth Of Food On Grubhub
Eagles Coach Nick Sirianni Brought His Kids To A Press Conference & It Was Hilarious
The Best TV Shows For 5-Year-Olds
What Parents Are Talking About — Delivered Straight To Your Inbox