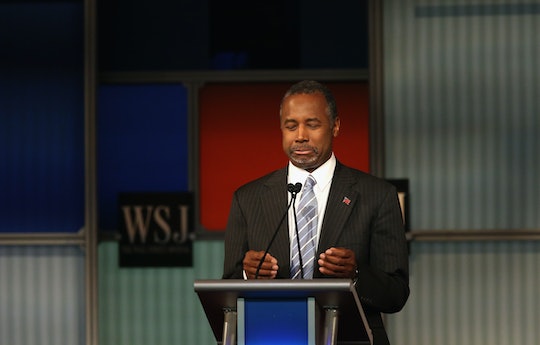 Tonight's Republican debate in Milwaukee, Wisconsin brought together the last standing GOP members seeking the office of the prez. (Which, OK, admittedly is still a ton of people.) But as the candidates were tossed questions about tax reform and minimum wage during the two-hour, finance-focused debate, most ears were undoubtedly fixed on what the main front runners would say, particularly in their closing statements, a moment when the floor is theirs to lay it all out there. And one guy everyone was especially eager to hear from tonight? Ben Carson, whose closing statements attempted to remind the American public what he stands for — and perhaps more importantly, put him back in the good graces of voters, some of whom have been losing their faith in the candidate lately.

Before the first debates kicked off back in August, the name Ben Carson wasn't exactly a household one. But by the time the night was over, it was clear the quiet and somewhat reserved neurosurgeon had solidified himself as a top contender, totally worthy of going toe-to-toe with Trump. And a lot of that was thanks to his closing statement, which was powerful to say the least:

I’m the only one to separate Siamese twins. The only one to operate on babies while they were still in their mother’s womb. The only one to take out half of a brain, although you would think if you went to Washington that someone had beat me to it. (applause) But I’m very hopeful that I’m not the only one who will pick up the torch of freedom. Because freedom is not free!

Pretty powerful stuff. In fact, some even called Carson's closing argument "brilliant," and soon after, Carson sped ahead in the polls — a more subdued, cerebral option for those who are perhaps less keen on The Donald's — how shall I put this? — over-the-top personality. But a couple of months and a handful of debates can change things.

And so can a week filled with scandals and accusations that you're straight-up lying. Such was the week Ben Carson has had. While rumors had been swirling for the better part of a month, Carson's campaign team no doubt found themselves scrambling this week when several damaging claims surfaced.

There were claims that Carson has been lying about a story he's been telling for a while, wherein he claims to have stabbed his childhood friend. Officially, Carson has vehemently denied that he ever lied about the story, and maintains that he was, in fact, where he said he was. But according to CNN, several people close to Carson growing up have said they have no memory of such an event, and no records of it have been uncovered. But the accusations didn't end there: Other claims surfaced claiming Carson didn't actually receive a scholarship to West Point, as he's told several sources in the past.

But tonight was Carson's chance to redeem himself, and re-establish himself as a truthful, honest candidate. (Or at least flip the script momentarily.) During the debate, viewers watched as Carson and his fellow candidates were hit with a ton of tough questions — though none truly probed as far into the lying accusations as curious debate-watchers may have liked.

But then came his closing statements — which, honestly, were kinda weird right off the bat. Clearly, they were crafted to drive home that Carson knows what troubles plague the American people; he knows how hard it is out there for millions of struggling Americans. But to be honest, they were a little weird; and at times, morbid. In his less-than-thirty-second statement, Carson spoke slowly, in a monotone, unenthused voice. (In other words, it's exactly the same stuff we've grown used to hearing over the course of the campaign so far.) Instead of choosing to leave things on an uplifting note, or perhaps rattle off a Trump-esque "Let's make America great again" one-liner, Carson chose to string together a slew of, frankly, depressing stats. Said Carson:

In the two hours of this debate, five people have died from drug-related deaths, a hundred million dollars have been added to our national debt, 200 babies have been killed by abortionists, and two veterans have taken their lives out of despair. This is a narrative that we can change. Not we the Democrats, not we the Republicans; but we the People of America, because there is something special about this nation and we must embrace it and be proud of it and never give it away for the sake of political correctness.

Just me, or... a little weird/morbid/underwhelming? At least in terms of his overall performance tonight, Twitter seemed to be in agreement with me:

In the end, tonight was poised to be a pretty big night for Carson; but it's not clear that he really delivered. Either way, we'll know the answer tomorrow, when we wake bright and early to those shiny new poll numbers.