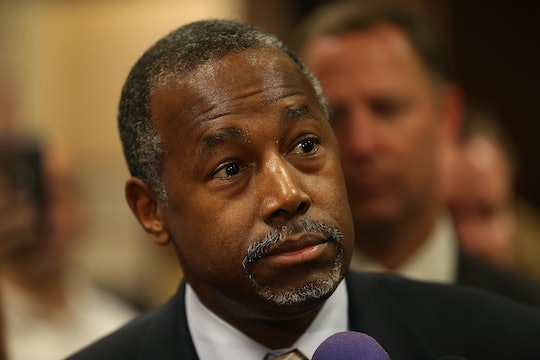 Republican presidential contender — and the party’s new front-runner — Ben Carson has released a new radio ad that targets a different audience than his usual message: young African American voters. On Thursday, the campaign unveiled a new 60-second radio spot geared toward urban listeners in eight markets. On its own, that doesn’t seem strange. But what might seem a bit odd is the strategy that's used in the advertisement: rapping. Ben Carson’s new radio ad is a rap song and frankly, it seems a little desperate.

When politicians try to be cool, the results can be… well, mixed. Some political figures have an easy confidence that helps them connect to younger voters. They can make references to pop culture and social media in a way that feels unforced, even natural (looking at you, President Obama). And it helps with a politician’s political platform and agenda actually matches up to their advertising strategy.

But given Carson’s rocky relationship with the African American community, the connection seems odd and more than a bit forced. While Carson is the only African American candidate in the 2016 race, he’s been one of many conservative voices ignoring (or actually slamming) concerns from African American voters, including calls for national dialogue on racial violence and police brutality.

Carson campaign spokesperson Doug Watts told ABC News Thursday that the ad is meant to “awaken, appeal to and motivate the urban market, specifically catering to younger black voters,” a market that Watts conceded had been a “non-traditional” target for Republicans. He added that Carson was seeking to attract more young black voters by “reaching out and talking to them in a language that they prefer and in a language that, and in a cultural format that they appreciate.”

We’ll have to stay tuned to see if Carson’s rap ad manages to overtake Jeb Bush’s “Jeb Can Fix It” slogan for most dismally awkward candidate message.