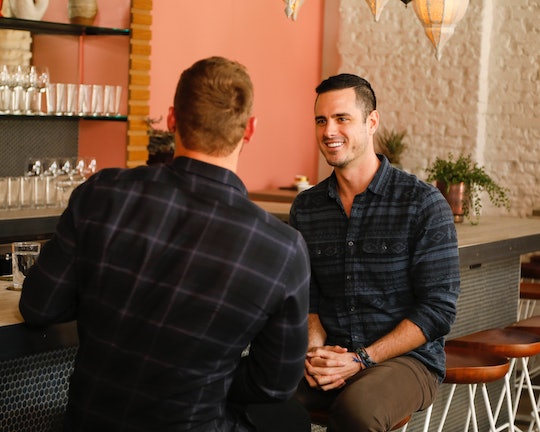 Ben Higgins Paid Colton Underwood A Visit On 'The Bachelor'

There comes a point in every season when the Bachelor must call upon those who stood in his position before him to get a little advice on how to proceed with his ~journey~ and this week was Colton's week. Ben Higgins made a cameo on The Bachelor to give Colton a little pep talk and fans were beyond thrilled to see the comforting presence on their screens.

This week's episode took the remaining contestants to Colton's hometown of Denver, which just so happens to be where Ben is from, too. The pair met up at a brewery, where Ben was oh-so-casually shuffling papers around, prompting Bachelorette alum Diggy Moreland to wonder whether he had been doing his taxes when Colton showed up. The latter confessed that he had been feeling super exhausted by The Bachelor process, but Ben gently reminded him that the most stressful part was still to come.

"Here's the crazy part," Ben explained, "Next week is hometowns! These next couple of weeks for you will be some of the most intense, hard, joy-filled, some of the most emotional things you've ever experienced. I promise you, up to this point is nothing compared to what's to come, so I'm here for you, man."

Colton shared with Ben how the last three women he eliminated had all warned him there were still contestants in the mix who "weren't ready" for marriage. And every time he thought he was cutting the primary suspect, Colton got the same warning. Understandably, he's experiencing some frustration.

"You just explained to me, I think, exactly what you need to explain to them," Ben sagely advised. "'Hey, I'm scared, I'm fearful' And you can just ask them individually, 'Are you in this? I want to trust you, like, why are you here right now?' As soon as you allow this person to get to know you fully, then you can start building a foundation for a relationship that can take you into the future."

Colton also expressed some inner conflict about how he thought he'd know right away who he'd be proposing to the end, but now he's falling in love with multiple women at the same time. Luckily, this is something Ben has a little expertise in. He infamously told both his final contestants he was falling in love with them, breaking an unspoken Bachelor contract.

"My only advice now is lean in, be intentional," Ben told Colton. "And also, don't be scared. This could all just be about you trying to find the right one and them trying to find you."

Fans seemed impressed with Ben's wise counsel and more than a few tweets expressed a desire for a one-on-one relationship therapy sesh with the former Bachelor. Ben may have ultimately broken up with fiancée Lauren Bushnell, but Colton let him know that he appreciated the advice on how to handle the rest of the season. The pair hugged it out, leaving Colton to tackle the rest of the week on his own.