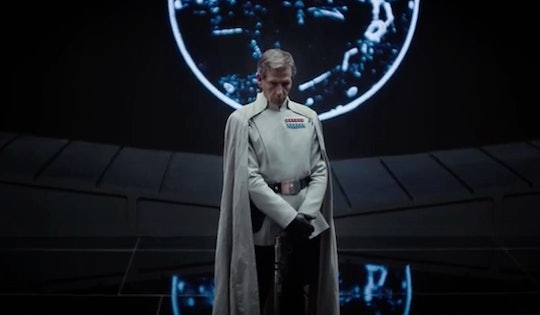 Ben Mendelsohn's Cape Is Winning The 'Rogue One' Trailer

Unless you've been stuck on a Death Star somewhere off this planet, you've probably heard about the hotly-anticipated drop of the first installment in a series of Star Wars spin offs. The trailer for Rogue One: A Star Wars Story came out Thursday, and fans are tweeting up a Tatooine sand storm, dissecting every detail of the trailer. But one item from the trailer is becoming near obsession for fans. Ben Mendelsohn's cape won the Rogue One trailer and has already become the stuff of Star Wars legend.

Any fans who might have been worried the new story lines and characters could never live up to the originals had their fears put to rest when a gorgeous, sweeping, dark, and tense trailer for Rogue One unrolled itself on media players across the world Thursday. But for all the trailer's one-liners ("I rebel"), effects and performances, the single most compelling aspect is the #flawless cape worn on Mendelsohn, an Australian actor from The Dark Knight Rises, who is apparently playing some sort of Imperial Admiral villain on the new Rogue One movie. There's even a rumor circulating that Mendelsohn's character might actually be the father of the lead character, Jyn Erso, who is, according to the trailer, given the mission to steal the plans for the Imperial Death Star for the Rebels so it can be destroyed. And all of that sounds real interesting, but before anyone can focus on that, the Internet is going to need to know where to get one of those capes.

It's so fierce, it helps you walk on water, people!

So I think it's safe to say Grand Admiral capes are going to be a "thing" for fall, leading up to the December release of Star Wars: Rogue One. And they'll certainly make an appearance at a number of Halloween parties in October. Whether you're looking to rock it as a fashion statement or just a little Star Wars cosplay fun, the cape will likely be made for commercial production at some point. Still, there's also no doubt some devoted fans are already trying to make the cape happen — even if they have to use a white curtain.

You know, one of those capes could really dress up a pair of yoga pants at preschool pickup or even the grocery store. Maybe there is an under-served market for a new line of "mom capes" inspired by Mendelsohn and his Imperial Admiral cape. There seriously would be a market, so someone needs to get on that ASAP.