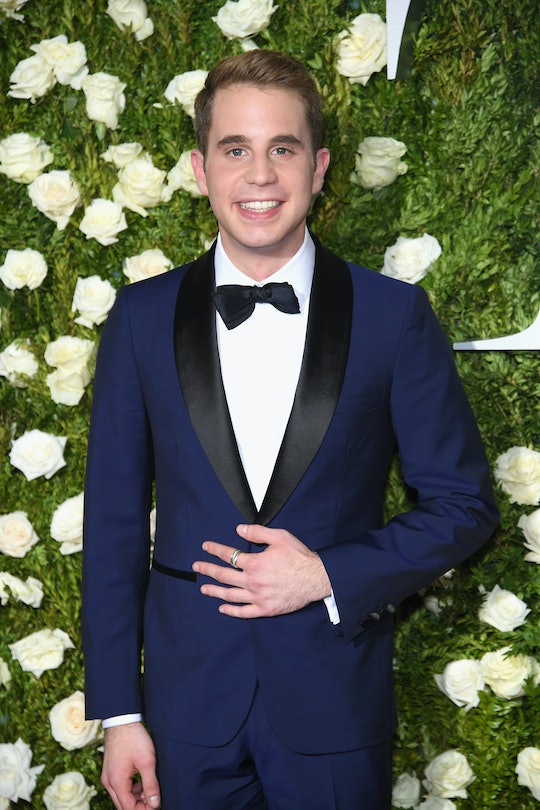 Ben Platt's Tonys Speech Will Make You Love Him Even More

As expected, the win for best lead actor in a musical at the 2017 Tony Awards went to fresh-faced newbie Ben Platt for his work in Dear Evan Hansen, the most talked-about new musical since Hamilton. And boy, Ben Platt's Tony Awards acceptance speech proves how much he deserved the win. Hold on, I'm still wiping away tears from my keyboard.

Dear Evan Hansen tackles themes of social anxiety and teen suicide, which are not easy themes for a musical to tackle, and all of this falls mostly to the show's 23-year-old star to carry. And he did it really, really well. Platt himself was probably the only person who was actually surprised that he won the Tony, which he definitely appeared to be, spending the first of his precious seconds holding the award in charming shock, and saying "that's a Tony."

After recovering himself somewhat, Platt then launched into a hurried, heartfelt, truly meaningful acceptance speech that showed just how much he really deserved to win. He thanked his family, friends, and cast of course, and also took a moment to tell young people watching that they should always be true to themselves. It's an old, and perhaps cliche adage, but one that's especially important for anyone that young who ever feels weird and alone.

Everyone usually thanks their families and their parents in their acceptance speech, but somehow nothing I've seen so far has felt quite as earnest or as heartfelt as Platt gushing about his "edible, edible" nephews watching in California, or how his parents are the best people in the world (he'll fight you) and how his dad first taught him to be a good person before he could be a good artist.

He also spoke about finding home in the theater, ever since he played Prince Charming in a production of Cinderella as a little kid. “It’s where I found everything I ever loved and where I belong,” he said. He saved his most important message, however, for the end, speaking over the music that was trying to hurry him off the stage:

It's such an important message for everyone, and really speaks to the message of Dear Evan Hansen. The only downside to this is that it's probably going to be a lot harder to get tickets to the show now.