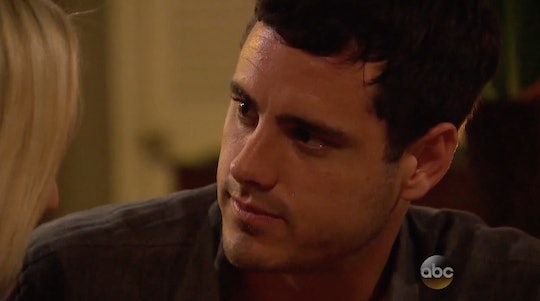 Bachelor fans, brace yourselves, because the most dramatic moment of this season may have just happened. Ben Higgins said "I love you" to Lauren on this week's episode of The Bachelor, and fans are literally losing their minds. Does this mean she is the final winner?! I'm willing to bet money on it.

During Ben and Lauren's one-on-one date, the two decided to take things to the next level and get in some alone time in the fantasy suite. Before the pair had their off-camera time, though, Lauren reluctantly spilled her heart out to Ben, admitting that she is in love with him. After what felt like the longest pause ever (I was literally at the edge of my seat), Ben reciprocates those feelings and tells Lauren "I love you too." Oh. My. God. I'm sure I speak for everyone when I say — did that really just happen?!

Dropping the L-bomb has become somewhat of a taboo on The Bachelor. In fact, Ben is the first bachelor in history to say "I love you" to two women. So did he plan to make that bold move? Or did he just get caught up in the moment? Whatever the reason, it came as a major shock to fans across the nation.

The following tweets sum up the complete fandom freakout spreading through the Twitterverse right now.

This was basically my exact reaction.

If he broke the rules for her, he must really love her.

Some people got a little angry...

And others are totally on board.

My heart is melting.

Somebody stop the madness!!!