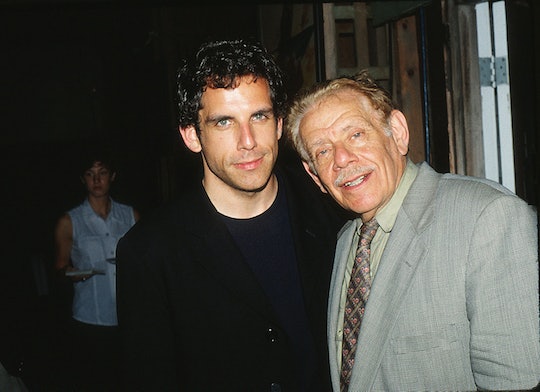 The legendary comedian best known for his iconic roles as Frank Costanza on Seinfeld and Arthur Spooner on The King of Queens has passed away, according to his son. Ben Stiller announced the death of Jerry Stiller on Monday in an announcement that remembered the late actor as "a great dad and grandfather, and the most dedicated husband." According to the actor, his father died of natural causes at the age of 92.

"I'm sad to say that my father, Jerry Stiller, passed away from natural causes," Ben Stiller announced Monday via Twitter.

The Meet The Parents actor went on to remember his father as being a devoted family man. "He was a great dad and grandfather, and the most dedicated husband to Anne for about 62 years. He will be greatly missed. Love you Dad."

Born in Brooklyn in 1927, Jerry Stiller served in World War II before meeting Anne Meara, the woman who would later become his wife, at a casting call in 1953. According to CNN, the two fell in love and went on to launch their careers together as the "Stiller and Meara" comedy duo. Soon they were performing their act in nightclubs across the country and appearing on The Ed Sullivan Show, TIME reported. Radio commercials and dozens of film, television, and stage projects followed until 1970, at which time CNN reported the pair split professionally so as to preserve their personal relationship.

"I love Anne, but if I had depended on her in my professional life, I would have lost her as a wife," Stiller told People in a 1977 interview. "We felt like two guys. I didn't know where the act ended and our marriage began."

While Stiller maintained a solo-acting career, it wasn't until 1993 when, at the age of 66, he landed one of his most memorable and iconic roles — Frank Costanza on Seinfeld. According to Reuters, Stiller felt his career was winding down when Seinfeld co-creator Larry David approached him about joining the cast. And while the character of Frank Constanza was initially written to be a meek and understated contrast to his loud and overbearing wife, Stiller improvised, creating the loud, crotchety character Seinfeld fans have come to love.

"From that day on, it was the best years of my life as an actor because I worked with people who were the most generous actors in the world," Stiller told the Archive of American Television, according to Reuters.

When Seinfeld ended in 1998, Stiller took his temperamental father act to The King of Queens for the role of Arthur Spooner. For nine seasons, Stiller played the wacko father of Carrie, played by Leah Remini, who lives with his daughter and her husband Doug, played by Kevin James.

Along with Ben Stiller, the comedy icon also leaves behind daughter Amy Stiller and two grandchildren.

More Like This
Sarah Levy Reveals Birth Of Her Baby Boy & His Name Is A Sweet Tribute To Her Dad
Catherine Reitman Calls It Like She Sees It: “Being A Working Mother Is Impossible”
Barack & Michelle Obama Shared The Most Adorable Baby Photos Of Malia On Her Birthday
Victoria Beckham Reflects On Being Forced To Weigh Herself On TV After Giving Birth