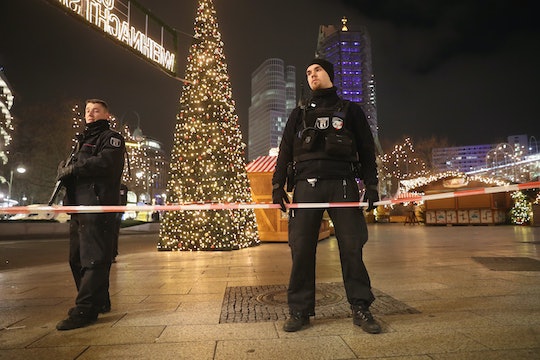 Berlin Market Truck Crash: What We Know So Far

A tragedy unfolded late Monday evening in West Berlin as a truck drove into a crowded Christmas market, according to local police. While details about the Berlin Christmas market truck crash are still emerging, here's what we know so far. Multiple media outlets are reporting that at least nine are dead and 50 injured after a truck registered to a Polish haulage company crashed into pedestrians at the Breitscheidplatz Christmas market near Kaiser Wilhelm Memorial Church. According to The Guardian, the owner of the company, identified as Ariel Z, was interviewed on Polish radio TVN24.

Ariel stated that his cousin, who has been driving trucks for 15 years, was indeed scheduled to be in Berlin Monday afternoon. He "could not imagine" that his cousin would crash into a market. Kate Connolly, a Berlin correspondent for The Guardian, confirms there is a "strong suspicion ... that the vehicle was hijacked at some point during its journey."

As reported at The New York Times, the truck's driver fled the scene after the crash, and there was a passenger found dead inside the truck. The Breitscheidplatz Christmas market is a popular tourist destination in Berlin, and it inhabits a plaza between two main thoroughfares.

The Berlin police, along with the Berlin state interior minister, have not yet confirmed whether the incident is an accident or an attack. The Berlin police department is using its Twitter account to communicate updates in both English and German. According to the account, the background of the driver is "still unclear," and a "suspicious person" has been arrested. "Whether it is the driver of the truck, is currently under consideration," the police Tweeted.

Emma Rushton, a witness to the event, told CNN that the truck didn't slow down as it entered the pedestrian area. "There's no way it was an accident," she said. Similarly, Mike Fox, an English tourist in Berlin and another witness to the crash, told The Associated Press that "it was definitely deliberate." Multiple witnesses reported seeing victims under the truck after it came to a stop.

The attack comes at a time when many countries in the European Union, including Germany, are fearful of attacks carried out in the name of ISIS. The most recent terror attacks in Germany all occurred in July, according to CNN: The most recent one, on July 24, involved a Syrian suicide bomber who injured 15 people at a music festival and had pledged allegiance to ISIS. An earlier July attack, this one involving a gunman who left nine dead in Munich, was never linked to ISIS, while the third July attack, in which a teen stabbed five passengers on a train, was "apparently inspired by ISIS," according to CNN. There were no deaths in the train attack.

Just last month, the U.S. Department of State issued a travel alert for Europe, specifying Christmas markets as potentially dangerous spots. While the present incident in Berlin has not been confirmed as a terrorist attack, the White House issued a statement early Monday evening U.S. time condemning “what appears to have been a terrorist attack” in Berlin.

As information about the crash in Berlin continues to come out, people around the word will be keeping the victims in their thoughts.