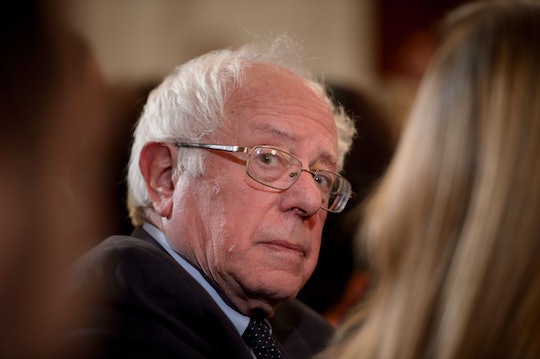 During a prime-time CNN Town Hall broadcast on Monday evening, Vermont Sen. Bernie Sanders called Trump a "pathological liar," a stark label that has prompted vociferous reactions on social media platforms. During the one-hour discussion with Sanders, which was moderated by CNN anchor Chris Cuomo, Sanders said of the president-elect, "We are dealing with a man who in many respects is... how can I phrase this?... you know, a pathological liar." Given that Sanders was assigning a psychological disorder to the former reality television star who will soon be the chief executive of the world's most powerful country, Cuomo interjected to confirm.

"The man was elected by the American people, he's the next president of the United States — and you're comfortable with that description?" Cuomo asked. "Unfortunately, that's a reality," Sanders said.

Indeed, the unfortunate reality of Trump's proclivity for falsehoods has been widely documented. In September, Politico's fact-checkers assessed how often Trump lied within a one-week time period while on the campaign trail, and found that the former Trump Steaks owner professed a "misstatement, exaggeration, or falsehood" 87 times during four hours and 43 minutes of public appearances, at a rate of one untruth every 3.25 minutes.

Another analysis at Politifact found that an astonishing 70 percent of Trump's public statements were "mostly false," "false," or "pants on fire," a higher percentage than any politician that the fact-checking website has rated, ever, in its history. Ironically, public opinion polls throughout Trump's candidacy found that he was perceived as more honest than Democratic nominee Hillary Clinton, who lied at a below-average rate.

Sanders didn't mince words on other topics either, saying that Trump "ran a campaign whose cornerstone was bigotry. It was based on sexism, on racism, on xenophobia." On the topic of Russia's involvement in the 2016 presidential race, Sanders said, "I think the evidence is overwhelming... this was a way for them to help elect the candidate of their choice, Mr. Trump."

Sanders' comment was in response to a recent declassified intelligence report that drew on findings from the Federal Bureau of Investigation, the National Security Agency, and the Central Intelligence Agency. The report concluded with "high confidence" that "Russian President Vladimir Putin ordered an influence campaign in 2016 aimed at the U.S. presidential election." The reality of Russia's involvement in the U.S. election has been difficult for many to understand, and Sanders' message seemed to be that action must be taken. "It's something that we've got to deal with," he said.

The overarching theme of Sanders' town hall interview was one of action and resistance. On the topics of both climate change and the potentially imminent repeal of the Affordable Care Act, Sanders emphasized that Democrats and Independents plan to work hard to continue to serve their constituents. "I am going to do everything that I can ... to improve the Affordable Care Act... but we damn well are not going to see it repealed and have no replacement there at all," he said.

Sanders said that Democrats are prepared to take on their new role as the opposition party, but they won't be staunchly obstructionist, as their Republican predecessors were during the later years of President Obama's presidency. Sanders believes that Democratic members of Congress will offer "constructive criticism when we disagree [with Republicans]." On the topic of climate change, though, Sanders didn't see much room for agreement over the nomination of climate change denier Scott Pruitt to head the Environmental Protection Agency. "It is kind of hard for me to imagine voting for somebody who doesn't believe that climate change is real," he said.

All told, it was a cathartic evening for the many millions of Americans who are fearful of what lies ahead.