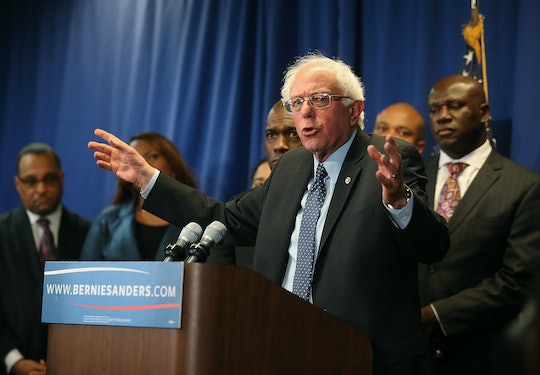 A DNC official claimed that there was a glitch in NGP VAN, technology used by campaigns to understand voters’ opinions and political leanings, according to BuzzFeed. The DNC alleged that the Bernie campaign could view Clinton supporters' information for about a half an hour on Wednesday and did so before they contacted someone about the issue. As a precaution, the committee has restricted Sanders' access to the entire database until it can guarantee that all of Clinton’s data is safe.

And people are outraged — but not all at Bernie. Those who are feeling the Bern, and some who aren’t, are calling this suspension a cheap move from the DNC or an effort to derail Sanders’ momentum, according to CNN. The DNC did not immediately respond to Romper's request for comment, but DNC chairwoman Debbie Wasserman Schultz told CNN that the move was crucial for security:

That is the only way that we can make sure that we can protect our significant asset that is the voter file and its integrity. ... They not only viewed it, but they exported it and they downloaded it. We don't know the depth of what they actually viewed and downloaded. We have to make sure that they did not manipulate the information.

Charles Chamberlain, executive director of Democracy for America — a group that recently endorsed Sanders — told CNN that the DNC should reverse the decision immediately:

The Democratic National Committee's decision to attack the campaign that figured out the problem, rather than go after the vendor that made the mistake, is profoundly damaging to the party's Democratic process. DNC leaders should immediately reverse this disturbing decision before the committee does even more to bring its neutrality in the race for President into question.

The move could be detrimental for Sanders, who just yesterday was endorsed by the Communications Workers of America, a union made up of 700,000-members. And with the third Democratic debate on Saturday night, this could be leveraged by other hopefuls to hurt Sanders' credibility. Additionally, the suspension comes weeks before Clinton and Sanders compete in the Iowa caucuses — when Sanders campaign would've used state voter data for last-minute outreach efforts — making the timing of the incident terrible for Sanders.

And Sanders campaign has taken action. On Friday afternoon, Sanders' campaign manager Jeff Weaver said the campaign would fight the DNC in federal court if Sanders' access to the DNC's voter file is not quickly restored, according to CNN:

The DNC, in an inappropriate overreaction, has denied us access to our own data. In other words, the leadership of the Democratic National Committee is actively trying to undermine our campaign ... If they hold our data hostage, we will be in federal court this afternoon seeking immediate relief.

In addition to the threat of legal action, the Sanders’ campaign has been vocal following the breach and subsequent suspension. Sanders spokesman Michael Briggs explained in a statement that the NGP-VAN has had issues in the past — like the one the campaign encountered. Instead of alerting the media, Briggs said they relied on “assurances from the vendor” hired by the DNC, according to The Guardian:

Unfortunately, yesterday, the vendor once again dropped the firewall between the campaigns for some data. After discussion with the DNC it became clear that one of our staffers accessed some modeling data from another campaign. That behavior is unacceptable and that staffer was immediately fired. We are as interested as anyone in making sure that the software flaws are corrected since mistakes by the DNC’s vendor also have made our records vulnerable. We are working with the DNC and the vendor and hope that this kind of lapse will not occur again.