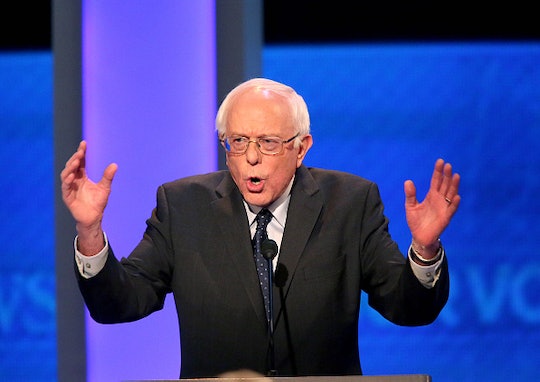 With just weeks to go until the election season really launches with the Iowa caucuses on Feb. 1, Sen. Bernie Sanders needed to deliver a strong performance at Saturday's debate. Bernie Sanders’ closing statement at the ABC Democratic debate seemed intended to show he is up to the task of representing the American people — beyond the primarily young, white voters who have made up most of Sanders’ support base until this point. The question is whether his showing at the debate will be enough to close the significant polling gap between Sanders and frontrunner Hillary Clinton.

Considering Sanders' poll numbers peaked after the last Democratic debate in November, the cheers that answered his closing statement indicated we can expect another rise. Still, experts are skeptical about whether it will be enough to pose any kind of real threat to Clinton. As Steve McMahon, co-founder of Purple Strategies, a political consulting firm, told The New York Times ahead of the meeting in Manchester, “I think if he wants to win the election, as opposed to winning adulation from his fans, he needs to figure out what contrasts he wants to draw and draw them more sharply and forcefully.”

Sanders attempted to do that during his closing statement by saying in full:

Well, thank you very much for hosting this debate. And let me applaud my colleagues up here because I think frankly, and maybe I'm wrong, but on our worst day, I think we have a lot more to offer the American people than the right-wing extremists.

My father came to this country from Poland at the age of 17 without a nickel in his pocket, which sparked my interest in the need for immigration reform because I know what it's like to be a son of an immigrant. We grew up in a three-and-half-room rent-controlled apartment in Brooklyn, New York. My mother's dream — and she died very young — but my mother's dream for her whole life was to be able to get out of that rent-controlled apartment and own a home of her own. She never lived to see that, but what my parents did accomplish is they were able to send both of their sons to college. We were the first in the family.

So I know something about economic anxiety and living in a family that doesn't have sufficient income. And that is why I am pledged if elected President of the United States to bring about a political revolution, where millions of people begin to stand up and finally say, "Enough is enough. This great country and our government belong to all of us, not just a handful of billionaires." Thank you very much.

Sanders’ closing remarks put an exclamation point on the end of a strong night for him. Now we’ll just have to see how that is all reflected in the next batch of polls.