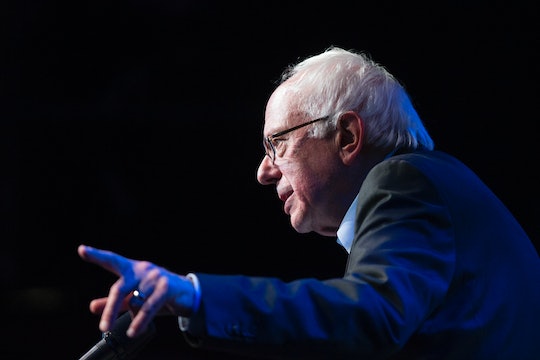 As early as this Tuesday, voters in Iowa and New Hampshire will see Bernie Sanders' first television campaign ad, according to NBC News. The one-minute spot is essentially a biography of the Vermont senator, spanning his upbringing in New York to his time as a Vermont mayor and as an elected member of Congress. And while the presidential hopeful's first ad lives up to the positive message that Sanders committed to early on, there's one overarching message in the ad that will certainly lift eyebrows in the rival campaigns: Sanders' television spot focuses on his honesty as a politician and a leader.

Titled, "Real Change," the promo begins with black and white images from Sanders' past: photos of the Democratic candidate as a child growing up in Brooklyn, his college days, and his time as a civil rights activist in the 1960s. The images switch to color as a female voice talks about Sanders' commitment to Wall street reform, fighting economic inequality, and addressing climate change as major themes during his time as a member of Congress and the key components of his presidential bid.

The ad delivers a positive, even transformative message. Rather than simply recounting the candidate's major policy points, the campaign seeks to frame Sanders as an agent of change. And with recent polls showing that former Secretary of State Hillary Clinton has claimed 50 percent of the polls after Biden's decision to forgo the presidential race, the ad takes a subtle swipe at Clinton that is sure to become part of the Sanders platform. Here's how Sanders is described toward the end of the spot:

Bernie Sanders. Husband. Father. Grandfather. An honest leader, building a movement with you, to give us a future to believe in.

The perception that Clinton is dishonest is one that has plagued her presidential campaign. Sanders famously put an end to an exchange about Clinton's email server issues in the first Democratic debate, and seems to use his first advertisement as a means to put even more distance between himself and the establishment candidate.

People are sick and tired of establishment politics and they want real change.

And that's the point, according to Sanders' campaign manager Jeff Weaver. In an interview with National Public Radio, Weaver said: "This ad marks the next phase of this campaign. We're bringing that message directly to the voters of Iowa and New Hampshire."

With three months to go before the first primary ballots are cast, The campaign confirmed that the televisions placements cost around $2 million, a pricetag very near what the Clinton campaign spent on her first ads. The bigger question will be whether the ads go far enough to tamp down Clinton's momentum; the democratic frontrunner has been running television ads in early primary states since this August.