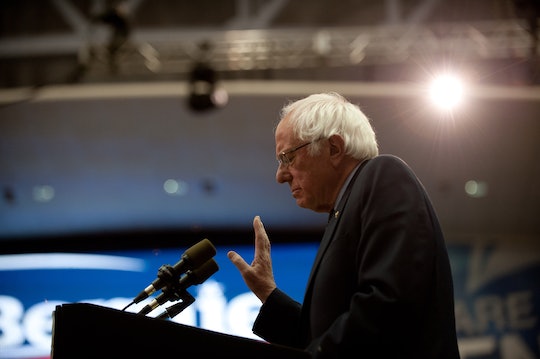 Vermont Sen. Bernie Sanders was an obvious choice for TIME's list of the 100 Most Influential People Over these past several months of campaigning for president, the world has fallen in love with this "Democratic socialist," a 74-year-old revolutionary rock star who looks and sounds like everyone's favorite grandfather. It's no surprise TIME named Bernie Sanders among its top 100 greatest influencers. And whether Sanders wins the Democratic nomination or not, the impact of his most unlikely campaign for president will be felt for many years to come.

It's almost hard to remember a time when Sanders wasn't a legit challenger to former Secretary of State Hillary Clinton's run for the nomination. It wasn't clear whether voters should actually take Sanders seriously. A socialist? In America? A revolution? Free college? Breaking up the banks? Can this guy be for real?

Turns out he was. And the combination of conviction and his obvious commitment to helping out America's rank and file drew in legions of Americans hungry for someone, anyone, who could finally call Washington D.C. what it has become: a cesspool of political wrangling completely out of touch with the needs of everyday Americans.

But beyond giving voice to a movement committed to giving the federal government a make over, Sanders biggest achievement in his bid for president has been his complete re-imagining of how campaigns could — and should — be funded. Sanders didn't court PAC money or large contributions from corporate titans; instead, he called on individual Americans to pitch in what they could so he could run a race for voters rather than rich industry — something he says is an important first step toward getting the money so poisonous to our democracy out of the equation. And that strategy has proved more successful than anyone could have ever imagined.

The Sanders campaign, thanks to individual, small donors has raised more than $140 million, giving Sanders the undeniable power to stay in the race and keep his message of social justice and financial reform front and center. It's an amazing feat and former Labor Secretary Robert Reich, who wrote about Sanders for TIME's list put it this way:

Sanders has shown it is possible to achieve all this with small contributions and a platform calling for single-payer health care, free tuition at public universities and a breakup of the biggest banks. His campaign has invigorated a new populist movement in America to restore democracy and create an economy responsive to the needs of ordinary people.

Couple that kind of disruption of business-as-usual within national politics with his undeniable appeal to young voters, and that makes for a message his primary rival, Clinton, simply couldn't ignore. That has given Sanders even greater influence over the election, as he's forced Clinton herself to focus on a rigged system of income inequality and advocate for positions like raising the national minimum wage to $15.

As the primary winds down, Sanders path to winning the nomination is all but mathematically out of reach with Clinton's big win in New York this week. But thanks to his well-funded war chest, Sanders can stay in the race all the way to the convention, pushing his vision of America, and pushing Clinton a bit further towards goals that are important to his own supporters. Yes, Sanders' influence on America and it's politics will be felt for years to come. Just ask his millions of enthusiastic followers who he's converted from a long-forgotten class of workers to revolutionaries Bern-ing for meaningful change.