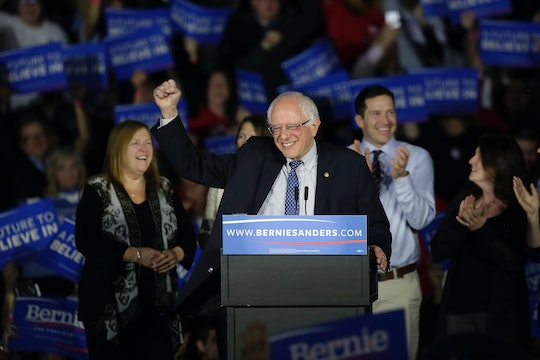 At the Iowa caucuses Monday night, it seems former Secretary of State Hillary Clinton felt the Bern — and so did the rest of the United States. While most people have had their eyes trained on the antics of businessman Donald Trump and the rest of the Republican candidates, Vermont Sen. Bernie Sanders snuck up in the Democratic race and, on Monday night, had the caucus numbers to prove he's a serious contender. He's got the take-back-America anger of Trump, but instead of aiming it at President Barack Obama, Mexican immigrants, and Muslims, he fuels it with real concerns plaguing the middle class and millennials. Bernie Sanders' momentum proves he's not going away, and it's about time voters start paying attention to him.

As the caucuses wrapped up in Iowa, showing a virtual tie between Sanders and Clinton, Sanders gave a rallying speech to his supporters. "Nine months ago, we came to this beautiful state. We had no political organization. We had no money. We had no name recognition. And we were taking on the most powerful political organization in the United States of America," he said, according to a New York Times clip. Sanders is right about his rather low-key beginnings — both he and Clinton declared their candidacies last spring, and at that point, Sanders lagged 40 percentage points behind Clinton. The fact that he has bounded ahead in polls to be a serious contender against Clinton shows that income inequality, corporate involvement in government, and affordable tuition, healthcare, and childcare are all pressing concerns for this generation.

That's not to say everyone is feeling the Bern in a good way. After Sanders jumped onto the radar in Iowa, #SocialismChecklist started trending on Twitter on Tuesday — and quite a bit of that feedback was of the "Beware of the scary socialists" variety. Others urged voters to look past the Cold War-vision-inducing label, however, and look up what socialism (Democratic socialism, especially) actually means.

I don't think the socialist label will be able to dampen Sanders' appeal, however, even for those who find the term foreign or intimidating, because he makes such a compelling case for his policies. Writer Will Bunch at The Philadelphia Inquirer attributes the rise of Sanders to a political theory called "the revolution of rising expectations" — i.e., Obama has made some good progress since he took the reins, but now that things are improving, people have even higher expectations for America's change.

Clinton offers quite a bit as a candidate, and she has sold herself as someone who will continue Obama's legacy, but Americans are aiming for bigger change than what they saw in 2008, even if they were quite pleased with Obama's administration. Sanders also gives young people the vibe that he is completely honest about his position on topics from wars to equality, which is reassuring as other candidates flip-flop on issues regarding same-sex marriage, abortion, and who they side with when it comes to taxation. Obama said it himself in a Politico interview:

Bernie is somebody who — although I don't know as well because he wasn't, obviously, in my administration, has the virtue of saying exactly what he believes, and great authenticity, great passion, and is fearless. His attitude is, 'I got nothing to lose.'

That authenticity, paired with America's economic concerns and a growing call for racial and gender equality, means that the socialism label is growing less scary for Americans. Sanders' policies are being looked at as solutions to American problems that have reached a tipping point. Be on the lookout, boys and girls — I have a feeling Sanders will continue to surprise us.