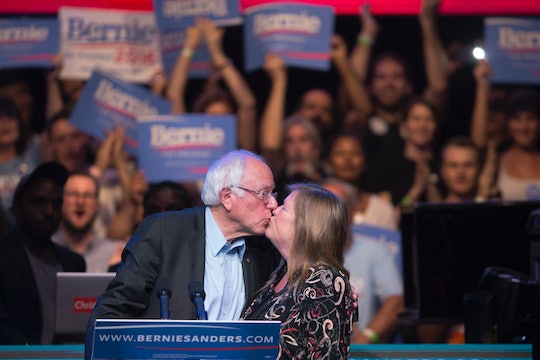 Sometimes it’s hard to see that politicians (or any celebrity, really) are just normal people. But at least some of them are — even those who run for president. On Friday night, Bernie Sanders' performance at the First in South Democratic Forum showed us a softer side of the Democratic candidate. Maybe it was the one-on-one format of the forum or the fact that he felt comfortable around Rachel Maddow, but he got more personal Friday than he has throughout his whole campaign.

The joke around the Web and political circles is that Bernie can be a little excitable. And when Saturday Night Live cast Larry David to play him in a debate, it made perfect sense. Bernie Sanders is your cranky, cheap grandpa.

At the forum last night, though, he opened up, managing to melt everyone's hearts. There are many facets to the Bern, it turns out, and they all don’t have to do with changing the world or taking on Wall Street. He addressed his “grumpiness,” and the good old days when Maddow pulled out an old picture of him organizing a civil rights group from the 1960s. (He knew exactly what the picture was of and when it was taken.) Though we don’t know what kind of president he’d be, it’s very clear he’d be the best grandpa ever. And, hey, I’d rent a grandpa over a mom any day.

But there were a lot of new things we learned about Sanders last night. Such as...

It must be his Brooklyn accent and his habit of frantically gesturing when he talks, but he’s not the grump you think he is. Sanders said, “Well, people think I’m grumpy. People think I am too serious. But I think what people don't see is I have seven beautiful grandchildren who are the joy of my life."

He Misses Peace And Quiet

When Maddow pulled out her “stupid” questions — what she called her lightening rounds of personal questions for each candidate — she asked Bernie what he misses most that technology replaced. His answer “Books. And I hate that I can’t be in a car without beeps and buzzers,” he said. “I miss peace and quiet.”

So maybe he is Larry David.

He Doesn’t Want To Fight (But He Does Anyway)

He knows people are waiting for him to trash Hillary Clinton. But he doesn’t want to.

It’s always this gotcha stuff. I can’t walk down a hallway in the nation’s capital without people begging me to beat up on Hillary Clinton, attack Hillary Clinton, tell me why she’s the worst person in the world. I resisted, I resisted, and I resisted. I think unlike our Republican friends there, who think that politics is about attacking each other in incredibly stupid and destructive ways, I think what we are trying to do is have a sensible debate on the important issues facing America.

But then he got a wee bit passive aggressive about his competition when talking about the Keystone Pipeline (which Obama rejected construction of Friday). “For me, as opposed to some unnamed candidates, the issue of Keystone was kind of a no-brainer,” he told Maddow. Nice shot, Bernie.

We learned a lot about Bernie last night — he's sensitive, a family man, and hates his cell phone as much as your dad probably does. Not that there's anything wrong with that.