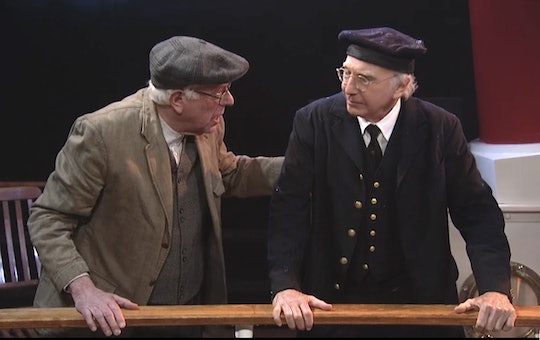 Talk about ringing in the 2016 primary season with a bang. Saturday Night Live fans were feelin' the Bern this weekend as Democratic presidential candidate and Vermont Sen. Bernie Sanders took to the SNL stage for a brief (but hilarious) cameo. Posing as an early 20th century version of himself, the notoriously frank senator pushed his best one-liners about the economy and the wealth gap on a stubborn shipman played by none other than Curb Your Enthusiasm's Larry David.

"I'm Bernie Sanderswitzky," Sanders jokes, introducing himself to David's character, a passenger on a sinking ship headed for New York who insists that he ought to get preferential treatment and a seat in one of the lifeboats because of his wealth and status.

Earlier in the sketch, David's character had been busying himself insulting other passengers, suggesting that the young boys getting into the lifeboats didn't deserve their spots because they had already hit puberty, and claiming that one of the women would attract sharks with her menstrual cycle. "I come from a wealthy family," he then exclaims. "Technically, my life is worth more than all of yours put together ... so if it's all the same to you, I'm gonna pop down into that lifeboat!"

"Hold on, hold on, wait a second," Sanders interrupts suddenly. "I am so sick of the 1 percent getting this preferential treatment — enough is enough!" He explains that the ship's passengers "need to unite together" if they want to make it out alive.

"Sounds like socialism to me," David's character snarks, before "Sanderswitzky" corrects him.

"Democratic socialism," he says. When David asks what the difference is between the two, Sanders takes the opportunity to poke a little fun at GOP rival Donald Trump. "YUUUUGE difference," he quips. "YUGE."

Although Sanders' appearance was a brief one — NPR noted on Saturday that the cameo was much shorter than both Trump's and Democratic rival Hillary Clinton's guest appearance last year — the eccentric senator did get the opportunity to introduce SNL musical guests The 1975 and chat briefly with David in between sketches. When David asked how the campaign season was coming along, Sanders joked, "It's pretty, pretty, pretty, pretty good."

David and the SNL cast also stole the opportunity this weekend to portray the senator himself in a short sketch called "Bern Your Enthusiasm", and obvious spin on David's Curb Your Enthusiasm in which the faux Sanders recalls how he lost the Iowa caucus to rival Clinton.

"How could we lose by five people?" Sanders' wife Jane (played by Vanessa Bayer) asks, watching the final caucus tally come in, which shows Sanders down by 0.2 percent. As staffers begin accosting him, asking what he had done to lose thee last five votes, the camera pans to the headquarter's television screen, where five voters wave back and smile smugly (earlier in the sketch, Sanders is shown refusing a handshake from one of them after they sneeze into their palm, then walking away from another woman who had asked Sanders to fix her dislocated shoulder following a minor car crash).

The Sanders campaign seemed more than happy to promote this weekend's SNL sketches, with the senator himself reportedly changing his Twitter avatar to a photo of David as Sanders from last November, and tweeting a line from one of David's original Sanders sketches. "We need your vacuum pennies," the real Sanders joked in a link leading to his official campaign website.

With the critical New Hampshire primaries just around the corner, Sanders' extracurricular SNL appearance and his good-spirited reaction to the lighthearted jabs were the perfect remedy for what will likely be a grueling week of political match-ups. Here's hoping he'll be able to weather that storm equally as well.