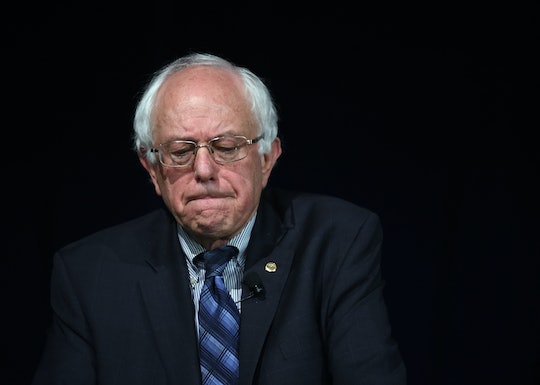 On Friday, seven known assailants attacked Paris in six different locations in the city, leading to the deaths of over 120 people. Over 350 people are wounded, with 100 of those 350 being critically wounded. And though entertainers like U2 and the Foo Fighters canceled events following the Paris attacks, the Democratic Debate aired on CBS Saturday night. And, after the tragedy in France, viewers can count on national security being a major theme during the two hours. And Bernie Sanders' quotes about the Paris attacks showed that the events in Paris haven't altered his approach to foreign policy or his belief that Wall Street and climate change are two major factors undermining U.S. national security.

But, during the debate, Sanders got the chance to not only vocalize his thoughts in more details, but also get into how he might protect the American constituency from ISIS, which claimed responsibility for the Paris terror attacks. And, as the militant organization grows stronger, it's valuable information for voters. As Democratic National Committee Chair Rep. Debbie Wasserman Schultz said, "The next commander-in-chief will be on the stage tonight [and] we will hear each of them talk about their views on how best to keep America safe and help our allies to fight terrorists."

That said, it wasn't a topic that Sanders was reportedly happy to talk about — CNN reports that Sanders was upset about the shift in tone of the debate, forcing him to go up against Hillary Clinton's strong foreign policy background.

So how will Sanders keep America safe? Here, a few quotes from Sanders about the Paris attacks, and his views on national security.

"Let me concur with ... all Americans who were shocked and disgusted by what we saw yesterday. Together leading the world, this country will rid our planet of this barbarous organization called ISIS."

ON THE BIGGEST THREAT TO U.S. NATIONAL SECURITY

"Climate change is directly related to the growth of terrorism, and if we do not get our act together and listen to what the scientists say, you’re gonna see countries all over the world — this is what the CIA says — they’re going to be struggling over limited amounts of water, limited amounts of land to grow their crops, and you’re going to see all kinds of international conflict. But of course international terrorism is a major issue that we’ve got to address today.

And I agree with much of what the Secretary and the Governor have said. But let me have one area of disagreement with the Secretary. I think she said the bulk of the responsibility is not ours. Well in fact, I would argue that the disastrous invasion of Iraq, something that I strongly opposed, has unraveled the region completely and led to the rise of Al Qaeda and to ISIS. Now in fact what we have got to do, and I believe there’s widespread agreement here, is the United states cannot do it alone. What we need to lead an international coalition which includes the Muslim nations in that reason who are going to have to fight and defend their way of life."

ON WHETHER THE U.S. IS RESPONSIBLE FOR THE RISE OF ISIS

"I don’t think andy sensible person would disagree that the invasion of Iraq led to the massive level of instability we are seeing right now. It's one of the worst foreign policy blunders in the modern history of the United States."

"We have to understand that the muslim nations in the region — Saudi Aribia, Iran, Turkey, Jordan — all of these nations, they’re going to have to get their hands dirty, put their boots on the ground. They are gonna have to take on ISIS. This is a war for the soul of Islam. And those countries who are opposed to Islam, they are gonna have to get deeply involved in a way that is not the case today. We should be supportive of them. So should the UK. So should France. But those countries are gonna have to lead the effort. They are not doing it now."

ON WHETHER THE U.S. SHOULD ACCEPT SYRIAN REFUGEES

"I believe that the United States has the moral responsibility with Europe, with gulf countries like Saudia Arabia to make sure that when people leave countries like Afghanistan and Syria with nothing more than the clothing on their back, then of course we reach out. Now what the magic number is I don’t know because we don’t know the extent of the problem. But I certainly think that the United States should take its responsibility for helping those people."

"This nation has the most powerful milItary in the world. We’re spending over $600 million a year on the military. And yet less than 10 percent of that is being used to fight international terrorism. We are spending hundreds of millions of dollars maintaining 5,000 nuclear weapons. I think we need major reform in the military making it more cost effective but also focusing on the crisis of ISIS. The Cold War is over, and our focus has got to be on intelligence [and] increased manpower fighting international terrorism.