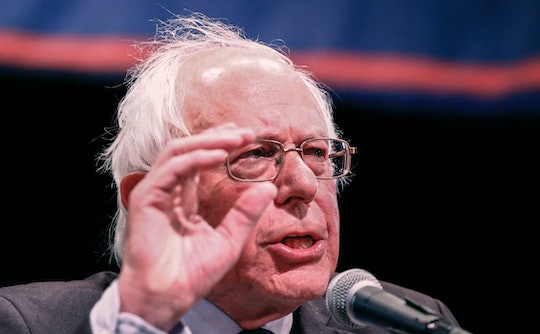 Vermont Sen. Bernie Sanders has always tried to stay out of the scandal surrounding former Secretary of State Hillary Clinton's private email server, even famously saying he was "tired" of hearing about her "damn emails" in an early debate between the two Democrats running for the party's presidential nomination. But what is Bernie Sanders' reaction to the FBI's recommendation on Clinton's email scandal just released today? He says it has no impact on his candidacy.

Sanders is in a weird spot. He's no longer actively campaigning for president, but his campaign is still active. Sanders hasn't suspended his campaign, but has said in interviews he will vote for and support Clinton and is willing to do whatever it takes to help defend Donald Trump, adding "It doesn't appear that I'm going to be the nominee," during an interview with CSPAN, The Hill reported.

Given his past statements indicating the emails were a distraction from important issues and his moves toward Clinton, it's not surprising that today's announcement by FBI Director James Comey that his agency will not recommend Clinton be charged with a crime was met with somewhat of a shrug by a Sanders' spokesman, according to The Hill, and this tweet from ABC reporter MaryAlice Parks.

But although Sanders has been publicly indicating he was working with the Clinton campaign to hone the party's policy platform, some have speculated that Sanders was keeping his campaign active just in case Clinton did face criminal charges (so he would be ready to slide into the nomination at the convention). Something Forbes writer Euel Elliott termed a "black swan event" that "goes by the name 'FBI'"

Sanders and Clinton had a private meeting on June 14, ostensibly to talk about moving forward and unifying Sanders' supporters — which include about 12 million votes and 1,900 delegates, according to the New York Times — behind Clinton. But, as of yet, Clinton has not received Sanders endorsement, nor has he officially conceded the race to Clinton.

A Clinton aide said, during the June meeting, both candidates engaged in “...a positive discussion about their primary campaign, about unifying the party and about the dangerous threat that Donald Trump poses to our nation," according to the New York Times. The two also reportedly “...agreed to continue working on their shared agenda, including through the platform development process for the upcoming Democratic National Convention.”