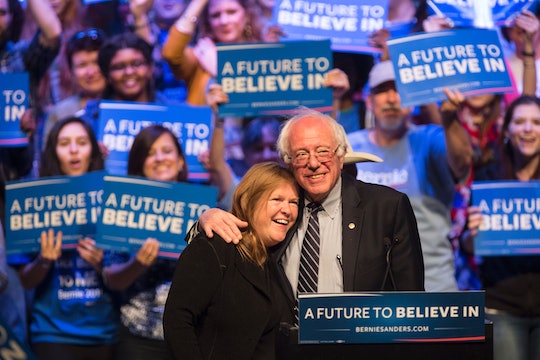 Every mom gets it: when the baby's hungry, there's no time to wait. One fan of Vermont Sen. Bernie Sanders found that out first-hand when she nursed her baby right in the middle of a rally. Sanders reportedly thanked the breastfeeding mom, affirming the importance of parents being able to do what they need to do.

Mom Elle Bradford attended Bernie Sanders' Cleveland rally with six-month-old Harper in tow, according to ABC affiliate Newsnet5. When Harper got hungry, Bradford decided to feed her right in the middle of the crowd: a moment captured by Reuters photographer Alan Chin. Bradford said she didn't really have a choice, according to The Huffington Post:

After the photo was taken, Bradford wrote on Facebook that both Sanders and his wife thanked her for feeding Harper in public:

After the rally, Bernie and Jane O'Meara Sanders both thanked me for doing what mothers do and taking care of my daughter when she needed her mom, even if that meant nursing in public!

Sanders tweeted his support of Bradford on Thursday:

In a Facebook post, Bradford said that she's getting plenty of "hate mail" but "more love mail" as news stories and blog posts come in from across the country featuring her now-famous photo. Though it's exciting to have the snapshot go viral, Bradford is hoping the story isn't over: she wrote to Ellen DeGeneres on Facebook asking for an opportunity to get a picture of Harper with Bernie and Jane Sanders. And forget #feelthebern, because Bradford is pitching a different hashtag for the Sanders campaign via Facebook:

So my boobs went viral today but it's okay because it was for Bernie Sanders. That being said, ‪#‎boobsforBernie‬ should be a thing. Fellow breastfeeders, I'm looking at you.

It's unlikely breastfeeding at political rallies will become a regular thing, but it's awesome to know that at least one candidate is cool with it. In July, People reported that lawyer Elizabeth Beck was questioning businessman Donald Trump during a 2011 lawsuit when she asked for a break. When Beck revealed it was to pump breast milk, Trump reportedly said, "You're disgusting." According to People, Trump later told CNN, "I may have said it was disgusting. I thought it was terrible." It's an example of the stigma that continues to follow public breastfeeding: a stigma that Bradford and Sanders are delightfully challenging.