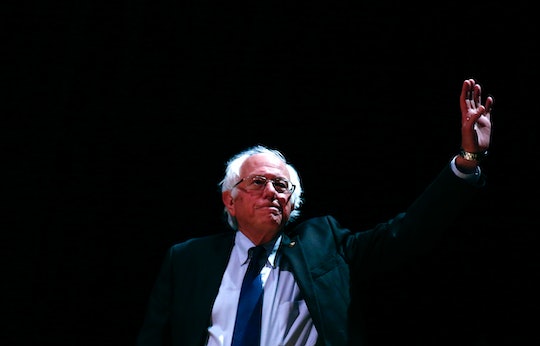 MSNBC interviewed Sanders recently and posted the footage on its Twitter account this morning. In the video, Sanders told reporters that he wants to defeat the presumptive Republican presidential candidate, Donald Trump, at all costs, even if that means voting for Clinton in November. He said,

I think Trump, in so many ways, will be a disaster for this country, if he were to be elected president. We do not need a president whose cornerstone of his campaign is bigotry, is insulting Mexicans and Latinos and Muslims and women, who does not believe in the reality of climate change when virtually every scientist who studies this issue understands we have a global crisis. That's not somebody who should become president.

What my job right now is to fight for the strongest possible platform in the Democratic convention and, as we speak in St. Louis, that’s going on right now.

Already, Sanders has been successful in raising new issues within the Democratic Party and even swaying Clinton's platform further left. Sanders has been vocal about immigration reform, racial inequality, protecting the environment, and workers' rights. As a result, Clinton's campaign has had to respond, broadening the range of discourse this election cycle.

Sanders himself seems to see this as his role in the race. Despite admitting he would vote for Clinton, and despite her large lead, he's continued to brush off the idea of withdrawing from the presidential election.

According to NBC News, when asked about dropping out of the race, he said, "Why would I want to do that when I want to fight to make sure that we have the best platform that we possibly can, that we win the most delegates that we can?"

Though he said he would vote for Clinton, he has not formally announced that he would endorse her. According to CBS, he refused to, but hinted that he would before the election. He told their reporters earlier in June, "I look forward to meeting with her in the near future to see how we can work together."

In his interview with MSNBC, Sanders refuted claims that his continued presence in the race is splitting the Democratic party. He said, "You talk about disunity. I talk about involving the American people in the political process." The danger, as many outlets have reported, is if Sanders supporters, come November, refuse to do what Sanders tells them to do: vote for Clinton.