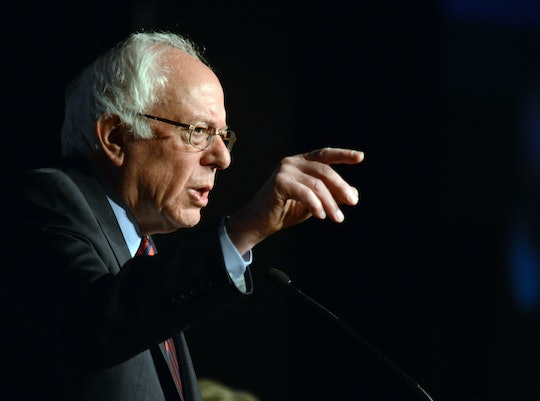 The Democratic presidential primary has taken a nastier turn this week with both candidates questioning the other's credentials. On Wednesday evening, presidential hopeful Bernie Sanders suggested Hillary Clinton was not “qualified” to be president. During a rally at Philadelphia’s Temple University, the Vermont senator told the crowd that former Secretary of State Clinton “[had] been saying lately that she [thought he was] ... not qualified to be president.” Amid a chorus boos from the crowd, he added, “Well let me just say in response to Secretary Clinton, I don't believe that she is qualified.”

Sanders’ controversial comments came after Clinton questioned the senator’s rocky interview with The New York Daily News. Critics have said the interview highlights his inability to talk about specific plans for accomplishing his campaign goals such as breaking up big banks and taking on Wall Street. When asked about the interview, Clinton told MSNBC’s “Morning Joe” that Sanders’ answers made it seem like “he hadn’t done his homework and he’d been talking for more than a year about doing things that he obviously hadn’t really studied or understood.” Although Clinton never said outright that Sanders was unqualified, a lot of news stories made that assumption, with a subsequent Washington Post headline reading “Clinton questions whether Sanders is qualified to be president.”

At the rally on Wednesday, self-proclaimed democratic-socialist Sanders criticized Clinton’s campaign financing, clarifying his earlier statements and insisting the Clinton's SuperPAC donations from special interest groups and voting record made any candidate unfit for the job, saying:

The senator, who at the beginning of his run promised he would run a clean campaign and never go negative, has amped up his criticism of the current front-runner following months of equally aggressive lobs from the Clinton campaign, perhaps hoping to close the 246 delegate gap between them.

Clinton has already begun fundraising off of Sanders' speech and her campaign sent out multiple emails Thursday denouncing the comments. “I don’t know why he’s saying that," she told a group of reporters outside of Yankee Stadium in the Bronx on Wednesday.

“It’s kind of a silly thing to say,” she continued, laughing off his comments, “I’m going to trust the voters of New York who know me and have voted for me three times.”

The Democratic presidential primary race has been heating up in the run-up to the critical New York primary on April 19. The latest CBS/YouGov poll for the New York primary finds Clinton up by 10 points beating Sanders 53 percent to 43 percent.

In an interview with Politico's podcast "Off Message" on Wednesday, Clinton questioned Sanders’ loyalty to the Democratic Party saying, "He's a relatively new Democrat. I'm not even sure he is one." She followed up by saying, “I know there's a big difference between Democrats and Republicans, and I know that Senator Sanders spends a lot of time attacking my husband, attacking President Obama, you know, calling President Obama weak and disappointing, and actually making a move in 2012 to recruit somebody to run a primary against him."

This criticism has popped up a few times in Clinton's remarks. In her interview with "Morning Joe" Wednesday, Clinton told Joe Scarborough she wasn't sure Sanders should even be running against her in the primary because "he himself doesn't consider himself to be a Democrat." She did go on to say that Sanders has "raised a lot of important issues that the Democratic Party agrees with, income inequality first and foremost."

The escalation in the race’s rhetoric risks burying the candidates’ policy proposals in a war of words, and with Sanders and Clinton will facing off in a New York debate on April 14, the atmosphere in the Democratic race is bound to get even more tense in the coming days.