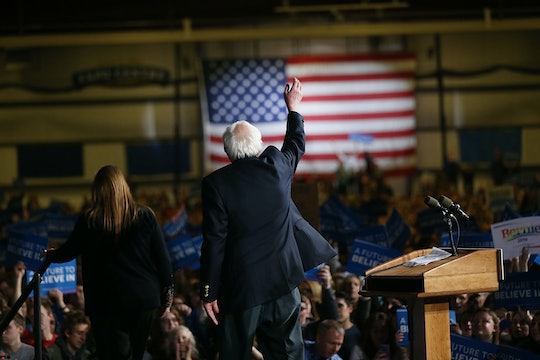 Although it may have been a little early in the night for a speech, Vermont Sen. Bernie Sanders spoke to supporters in Essex Junction, Vermont just after winning the state. Sanders managed to hit on many key points of his platform. But Bernie Sanders' Super Tuesday speech didn't mention women at all and that's sort of a big problem.

Sanders touched on many of his main points, speaking of bringing "Vermont values" to the rest of the nation, and reiterating that healthcare should be a right for all. He also repeated his position that college should be included in the game plan when Americans spoke broadly about "public education."

From there, he also took a hit at his opponent, former Secretary of State Hillary Clinton. He told supporters that "we can no longer let billionaires and their Super PACs destroy the American democracy." The crowd, obviously, went wild. Those are all very good things and in line with his mission to radically change even the most common American policies. But he didn't talk about women at all. His wife, Jill Sanders, stood by his side, but there was no mention of gender equality, equal pay, or even ad libbing about women's healthcare. Why does Sanders keep sidestepping around addressing women specifically?

A lot of it has to do with his political ideas in general. When Sanders says that "healthcare is a right for everyone" he means everyone. But he seems to just assume that getting women the care they need is easy. On his website, he makes women's rights a big deal. He talks about making abortion a choice between a woman and her doctor and leaving the government out of it. Or not allowing the "extreme right-wing to defund Planned Parenthood" or let companies deny coverage for birth control. These are all very good things (and a far cry from anything the Republican candidates are saying). But he's missing the point.

He needs to talk to women, specifically. There's no reason to think that Sanders doesn't care about women — he's surrounded himself with strong women in both his professional and personal life. But his focus on just economic issues and social class might hurt him in the long run. Just as he initially refused to address the Black Lives Matter movement in the early days of his campaign, Sander's failure to address demographic groups that actually vote is a problem. It's okay to think the campaigning game is silly, but if you want to run for president, you have to play it. Even just a little.

Then again, Hillary Clinton has also started to take the young, female vote for granted. In Iowa and New Hampshire, young females turned out for Bernie Sanders instead. Sanders made it very clear that his campaign plans on going all the way in his speech on Super Tuesday, so maybe eventually he'll learn to take it up a notch when it comes to addressing women directly.