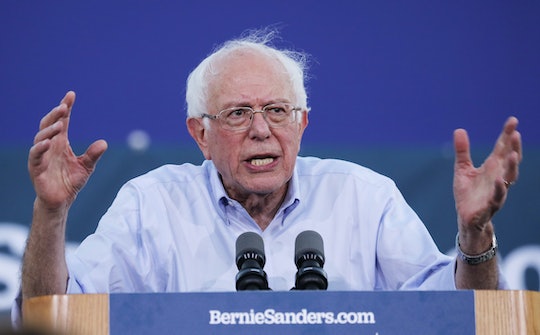 The first night of the second round of Democratic debates kicked off on Tuesday, July 30, and viewers didn't have to wait long for the drama to begin. Want some proof? Look no further than Bernie Sanders telling former congressman John Delaney he was "wrong" during a discussion on health care. Many viewers applauded the mic drop moment on Twitter, complimenting Sanders for telling it like it is.

Following opening statements from the first 10 Democratic candidates (the next group of 10 candidates will be debating on Wednesday), the official debate part of the debate began. Moderator Jake Tapper directed a lengthy first question to Bernie Sanders, according To the Daily Beast. "You support Medicare for all, which would eventually take away private health insurance away from more than 150 million Americans, in exchange for government-sponsored healthcare for everyone," Tapper began. "Congressman Delaney just referred to it as bad policy and previously, he has called the idea 'political suicide 'that will just get President Trump re-elected. What do you say to Congressman Delaney?"

And Sanders' response? It was a short and sassy, "You're wrong," followed by a long pause for emphasis — and then hearty applause and cheers from the audience. Mic. Drop.

Of course, Sanders elaborated on this zinger of a two-word answer. But judging by the Twitter reactions, plenty of people watching at home loved his approach. One person tweeted, ".@BernieSanders on fire. @JohnDelaney 'you’re wrong.' Healthcare is a human right."

Another person quoted Sanders, also tweeting a GIF of the senator with sunglasses saying, "Deal with it."

Yet another person chimed in with, "LOL. @BernieSanders just told John Delaney 'You're wrong.' and now is laying the f*cking wood to him."

Oh, and if you were wondering what Delaney's reaction was, it was pretty priceless.

Another Bernie Sanders moment worth mentioning was also on the topic of Medicare for All. As Vice reported, Ohio Rep. Tim Ryan repeatedly insisted that Sanders doesn't know what impact it would have on union workers. To that, Sanders shot back, “I do know. I wrote the damn bill!”

Unsurprisingly, the crowd again went wild — and so did Twitter. "Ryan: 'You dont know that' Bernie: 'I DO KNOW IT I WROTE THE DAMN BILL' That was good," one person tweeted, along with an incredibly fitting GIF.

Another Twitter user chimed in with, "'I wrote the damn bill' might be the line of the night. @BernieSanders did great job of pointing out American workers can get a RAISE if companies don’t have to pay for insurance. And all Americans would have better coverage than their current private insurance."

Of course, the fact that Sanders is a strong proponent for Medicare For All isn't exactly news. Ahead of round two of the Democratic debates, the Vermont senator led a group of about a dozen people with Type I diabetes to Canada to buy insulin — and at just a percentage of the cost they would paid here in the United States.

"It's an embarrassment for those of us who are Americans, we love our Canadian neighbors and we thank them so much, but we should not have to come to Canada to get the medicine we need for our kids to stay alive, we can do that in America," Sanders said after he left the Canadian pharmacy on Sunday.

Sanders is clearly passionate about everyone having access to affordable health care and prescription medication. And I have a feeling that, for those who align with his views and beliefs, his mic-drop moments about Medicare For All will stick with voters as this campaign continues.