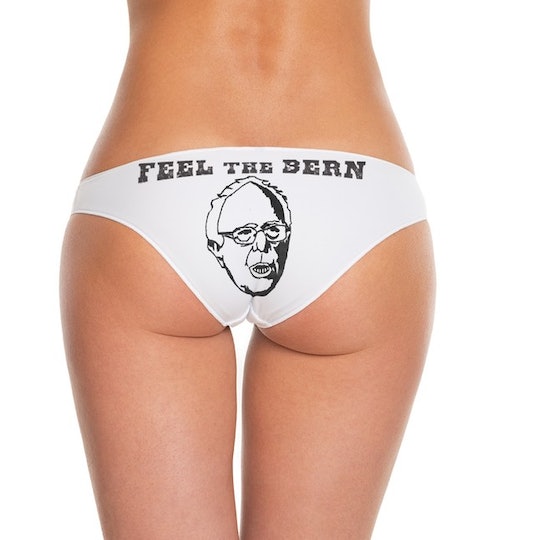 Bernie Sanders Underwear Is A Thing Now, & He's Not The Only Candidate With Weird Merchandise

It’s happening. Someone is selling Bernie Sanders underwear, donning the phrase "Feel The Bern." This is not a drill, people. The creepy (but let's be honest, kind of hilarious) garment is inspired by a line from Saturday Night Live’s October 17 episode, when Larry David portrayed Sanders at the Democratic debate. In case you missed it, here are some of David's most memorable lines from the sketch:

I don’t have a Super PAC, I don’t even have a backpack. I carry my stuff around loose in my arms like a professor, you know between classes. I own one pair of underwear. That’s it! Some of these billionaires, they have three, four pairs. And I don’t have a dryer! I have to put my clothes on the radiator. So who do you want as president? One of these Washington insiders, or a guy who has one pair of clean underwear that he dries on a radiator?

That was all it took for a trio of enterprising Bernie fans to throw together Bernie’s Briefs, which promises 10 percent of all profits to the Yellow Ribbon Fund, which benefits injured service members. The underwear, which costs $15 a pair (no wonder Bernie only has one), are available in women’s briefs, men’s briefs (which look saggy and sad), or boxer-briefs. They feature a cartoon image of Sanders’ face, which is where with the caption “Feel the Bern” also appears — which, ew. I’m sorry, but that phrase paired with that area is just not doing it for me. (I guess the designers have never had a yeast infection or Mexican food to know that that phrase is all too real?)

Although it’s not officially licensed merchandise, Bernie’s cool with it. He recently told Vermont’s WCAX, "It cracks me up, it's unbelievable, cracks me up. I guess we have Bernie underwear now.” And it’s possibly not even the strangest campaign merch out there right now. Take a look at some of the items available for purchase on presidential candidates’ official websites:

More Like This
Mom vs. Trend Shows You How To Recreate Popular Gen Z Beauty Trends
Ashley Graham On The “Fun, Organized Chaos” Of Raising Twins
Let’s Talk About Postpartum Hair Loss — & The Best Products To Deal With It
The Ultimate Baby Registry Checklist