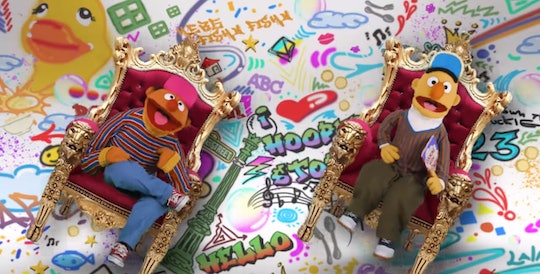 For nearly 50 years, the mild-mannered Muppets of Sesame Street have been teaching kids about everything from reading and counting to proper nutrition and how crayons are made. But to be honest, I think I love the show more now than I did as a preschooler, because their mimicry of popular adult programming is on point. I can't believe it's taken this long, but finally, Bert and Ernie parodied The Fresh Prince Of Bel-Air theme song, so get ready to feel nostalgic for two different periods of your childhood at once.

The Fresh Prince theme was an instant classic from the moment the show debuted in 1990, and it's been retooled with a Harry Potter angle, as told by the Joker, and as a Darth Vader origin story that's easily ten times more entertaining than the Star Wars prequels (and also about 730 times more concise). But did you ever wonder how the most iconic duo on Sesame Street met and ended up becoming roommates? There's no shortage of ambiguity surrounding Bert and Ernie: Are they humans or monsters? Adults or children? Who pays for their apartment? And what, exactly, is the nature of their relationship? None of that gets cleared up in the viral video, but now at least we know how they became the princes of a street called Sesame.

The video starts with Bert and Ernie in Muppet-sized copies of the Fresh Prince's iconic spinning throne, with the background art updated with a Sesame Street vibe, including references to some classic Bert and Ernie skits like "Here, fishy fishy" and "Put down the duckie." Bert gets things started, with Ernie, Oscar, and even Bert's mother chiming in:

Now, this is a song all about how / My life got flipped turned up eyebrow / Whoa! I didn't mean that literally! / Won't take long, just a minute, you see / We'll tell you how we became Bert and Ernie

There I met a grouch who didn't smell too good / Told me to "Scram!" leave the neighborhood / It was then I remembered what my mom used to say / "Keep your head up, be kind, and you'll find your way"

It's adorable how the video keeps the same vibe as the original — the goofy hat, the graffiti, even a side character who smells bad — while still keeping it completely sweet and wholesome. Unlike the Fresh Prince, who moved across the country to escape violence on the mean streets of Philly, Bert moves right down the street from his mom because he's... done learning numbers, I guess?

The puppet duo then explain how they eventually met and moved in together, a story that's sure to give kids unrealistic expectations about finding roommates and navigating adult relationships:

Showed him my paper clips, he thought they were great / Introduced him to Rubber Ducky as our new roommate / One half of a whole, one part of a pair / That's the story of how we became Ernie and Bert / Put it there!

True, Bert and Ernie can't exactly flow, but it's more charming (like a rapping granny) than cringeworthy (like a rapping maid of honor). It may not be as subversive as previous Sesame Street parodies of Stranger Things, The Walking Dead, or Game of Thrones (mainly because you can actually show your kid the original Fresh Prince), but the nostalgia factor makes it a must-see.