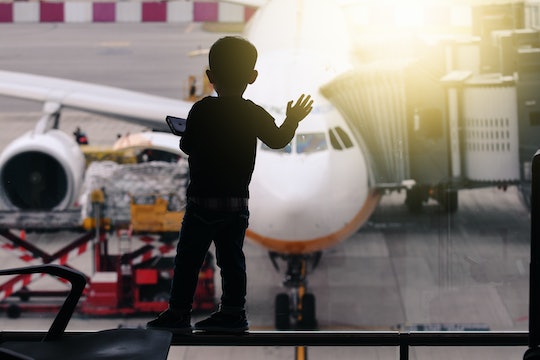 New Study Ranks The Best Airlines For Families In 2019

While many air travelers book their flights based on ticket prices, convenient departure times, and loyalty program rewards, those traveling with children often take a number of other things into consideration — and for good reason. Sometimes all that lies between a pleasant flight and an epic in-air meltdown is a bag of mini pretzels and in-flight entertainment. But the best airline for families in 2019 may surprise you as it's not the nation's largest carrier. According to a new study by The Points Guy, low-cost carrier JetBlue pushed out last year's number one to become this year's best airline for families.

"Many families, especially young families, have a lot of anxiety or even dread when it comes to flying," The Points Guy's director of travel Summer Hull said. "It can be hard to meet the needs of your kids while in a small tube flying miles above the sky without bringing the whole house with you, but while parents need to prepared for the flight, some airlines actually make the entire experience easier, from getting seats together to staying full and entertained throughout the flight."

The airline that made flying easiest for families this year, according to The Points Guy, was JetBlue. The low-cost carrier beat out Southwest Airlines, last year's top family-friendly airline, to become number one in the travel website's 2019 study. But what puts JetBlue ahead of the rest? According to The Points Guy, the airline's free seat-back entertainment, unlimited free snack basket, free W-Fi, seat size and comfort, easy frequent flier program, and ability for families to pool miles together for no additional charge helped it nudge Southwest aside.

"If JetBlue serves the route you need to fly, it should get serious consideration, as the airline simply is best in class when it comes to making it easy for families to fly," Hull and Michael Y. Park wrote in a summary of this year's study for The Points Guy.

It's worth noting that JetBlue was also ranked among the top five best airlines for families by travel blog Upgraded Points. Additionally, if you do decide to book your family's next vacation through JetBlue, The Points Guy has a number of tips for families flying JetBlue, such as take advantage of the free snacks and no fees for infants held on laps.

Still, The Points Guy's study noted that Southwest Airlines "did well" when it came to scoring, making it the second best airline for families in 2019. While free checked bags, no blackout dates, the Companion Pass, an extensive network of routes, and an early boarding window for families with children under 6, helped Southwest remain high on The Points Guy's list of family-friendly airlines, the inability to book trips more than six months in advance hurt the airline.

Hawaiian Airlines and Alaska Airlines came in third and fourth respectively, followed by Delta Airlines, which The Points Guy noted dropped two places since last year's study. Overall, Delta was applauded for generally having seat-back entertainment on top of an extensive network of routes, miles that don't expire, "solid" on time arrival stats, free Biscoff cookies, and free seat assignments. However, their "higher-than-average bag and cancellation fees and award availability prices for travel during family vacation periods" ultimately set the airline back compared to its competitors.

The Points Guy rated United Airlines sixth in terms of being best for families, followed by American Airlines, Frontier Airlines, and Spirit Airlines. Tenth on the travel website's list of the top 10 best airlines for families is Allegiant Air. The budget airline is noted to have a severely restricted frequent-flyer program and no available entertainment, kid-friendly snacks or meals, free advanced seat assignments, or early boarding for families.

To determine which airlines were best for families, The Points Guy weighed a number factors it believed to be most important for those traveling with children. These included things like complimentary seat assignments, the availability of early boarding, in-flight entertainment, snacks and meals for kids, seat size and comfort, additional fees, services available for unaccompanied minors, the airline's route network and mileage program, and how often its flights arrived on time.

While flying with children, especially toddlers and infants, can be stressful, it doesn't have to be absolute chaos. In fact, choosing an airline known for family-friendly perks and service could help you start your next family vacation off right, and ultimately lead to a more pleasant trip overall.