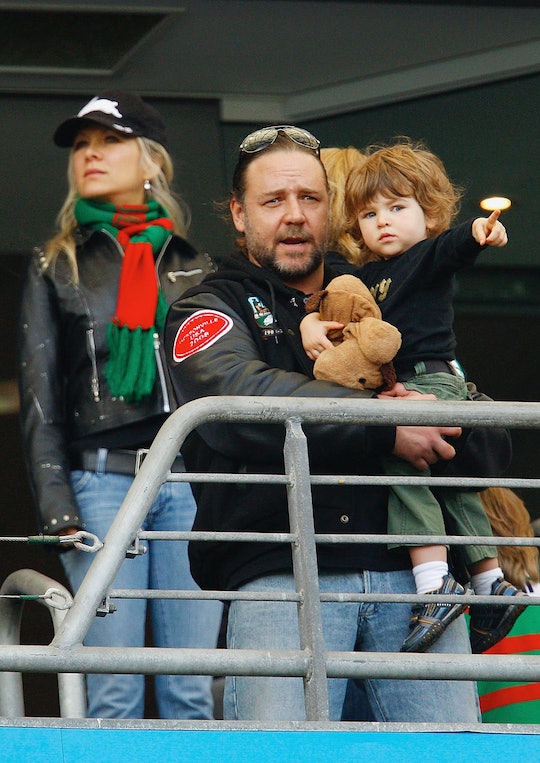 Are you not entertained? That’s something Russell Crowe claims he’d never need to ask while babysitting. During the promotional tour for their buddy comedy thriller The Nice Guys, Russell Crowe boasted that he is “the best babysitter” and that co-star Ryan Gosling would be lucky to have him watch his daughters.

As Ryan Gosling and Russell Crowe have been out promoting their new flick, The Nice Guys, together this past month, it’s become clear that the two actors are brand new BFFs. But Gosling drew a line in the sand when it comes to their friendship.

People magazine asked Gosling in an interview if he’d ever call on Crowe to babysit his daughters with actress Eva Mendes (20 month-old Esmeralda Amada and newborn Amada Lee). Though the Oscar-winner has two kids of his own, boys Tennyson, 9, and Charles, 12, Gosling didn’t seem keen on the Gladiator himself spending one-on-one time with his little girls. “God, no,” the Notebook star replied.

“I’m the best babysitter,” retorted Crowe. “He’s just worried that I’d be teaching his daughters how to make cocktails, the right way to wear a beret,” Crowe added, joking (we hope). “Things that he doesn’t want them to know about yet.”

Of course, every young lady should know how to sport a beret properly (said by a girl who wore her red one out during elementary school), but maybe Gosling is right in holding off Crowe from teaching his kids cocktail recipes—at least until after their terrible twos.

Besides this minor hiccup in their friendship, both Hollywood dads are adamant about maintaining a private family life out of the public eye. “With my kids—and this is something you’re going to come up as well,” Crowe said, gesturing to Gosling. “I grew up in a very different way from my kids. The thing you try to do continuously is make them understand where real life ends and where privilege begins so they’re aware of it.”

Both Gosling and Mendes too are aware of the importance privacy plays in their high profile life, especially when it comes to their kids. In an interview with Violet Grey, not long after the birth of elder daughter Esmeralda, Mendes said,

Whether we like it or not, privacy is going to be very difficult for Esmeralda. I think it’s unfair but that’s our reality. So Ryan and I decided early on to give her as much privacy as we could. And my pregnancy was the first opportunity to give her that. It’s such an intimate time for the mother, too.

In addition to providing privacy for his kids, Crowe’s added goal as a parent is to teach his kids to be grateful for whatever experiences his stardom does afford them. “I think with anybody,” he told the magazine, “gratitude is the most important driving energy.”

Granted, being the child of a star can get you into some seriously awesome places (Crowe’s kids have been spotted at sporting events and superhero movie premieres) but Crowe wants to make sure his children are “aware of when they’re doing something special that this is not a right, this is something they should be grateful for.”

For his part, Gosling says there is one “special” activity he can’t wait to share with his kids: Disneyland. “I can’t wait to go,” the former Mickey Mouse Club performer said. “I miss it.”

Maybe by the time The Nice Guys hits theaters on May 20, Gosling will have changed his mind and be willing to give Crowe a trial run at babysitting. Although, on second thought, after re-watching Gladiator, maybe Gosling's first instinct was right on.