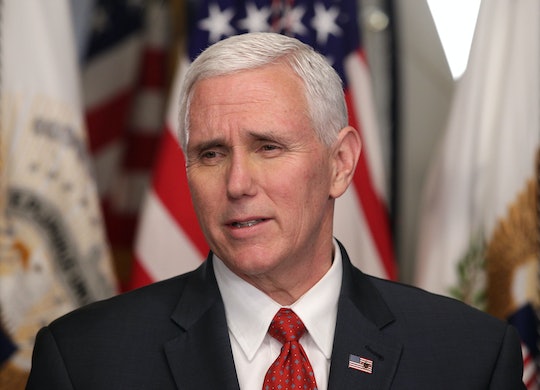 In an article featuring a profile of Vice President Mike Pence's wife Karen Pence published recently, it was revealed that the Mike never eats alone with a woman who isn't his wife. This has led to all sorts of articles in reaction to that fact, and to plenty of think pieces about what that policy means for everything from their marriage to the state of sexism and gender equality in this country Pence is now helping to run. But there's been a lighter side to those reactions as well. Twitter, Facebook and more have offered some of the best memes about Mike Pence not dining alone with women who aren't his wife, along with some other pretty silly reactions, and they're all very funny.

In 2002, Mike Pence told the Hill that he never eats alone with a woman other than his wife and that he won’t attend events featuring alcohol without her by his side, either.

This statement led to all kinds of reactions in response, with another writer for The Washington Post even penning a piece entitled, "Mike Pence doesn’t dine alone with other women. And we’re all shocked."

But some of the best responses have been, as always, in meme form. Romper reached out to the White House regarding the claim from The Post.

What better place to go looking for great memes and other funny reactions to this than Twitter? The popular social media network did not disappoint in the wake of this latest news about Mike Pence, with hilarious gems popping up all over the place over the last few days.

The Onion did an entire article making fun of the news, but tweeted this to sum it up:

"Mike Pence Asks Waiter To Remove Mrs. Butterworth From Table Until Wife Arrives," the account tweeted, along with a photo of the Vice President sitting alone at a table with a bottle of the famous syrup-y figure placed to his right.

Twitter user @Kappa_Kappa tweeted a photo of Pence eating ice cream next to a woman who is clearly not Karen Pence, and asked, "Well, well, well... what's going on here, @mike_pence? WHO IS SHE?"

Author Quinn Cummings tweeted a photo of Pence and family, but it appeared that the mirrored reflection next to him did not also reflect the daughter to his left for some reason (photoshop?). She made fun of this moment, tweeting, "#pence is so careful about being around women who aren't his wife that his reflection refuses to be seen sitting next to his daughter."

Comedian Cyrus McQueen poked fun at some of Pence's more dangerous political views in regard to women's health access, tweeting, "Pence won't dine with a woman other than his wife? How strange... I bet he thinks they don't have a right to choose their own entree either."

And from MTV's Girl Code, Shalyah Evans had a more light-hearted take, tweeting, "Pence doesn't want to eat w/ women who aren't his wife cuz he has to shed his human form to feed & its just so darn complicated to explain."

And comedian and actor Rob Delaney brought it all back to Pence's political views and actions, tweeting, in a series of several posts he put out in regards to the situation, "Guys relax, Mike Pence CAN be alone with women other than his wife IF they're figuring out how to dismantle Medicaid or bust a union."

The news about Pence making a commitment never to eat alone with a woman who isn't his wife may seem sort of funny on the surface, and people on social media are definitely having a field day with it.

But we can't forget that Mike Pence has made plenty of controversial decisions in regards to women in his role as a governor and now as vice president: like casting a tie-breaking vote in the Senate on Thursday to pass legislation allowing states to withhold federal funding from Planned Parenthood and other similar health care centers that provide abortions. It's best not to lose sight of the things our political leaders are doing that actively impact our lives, and to not be blinded too much by hilarious memes about them.