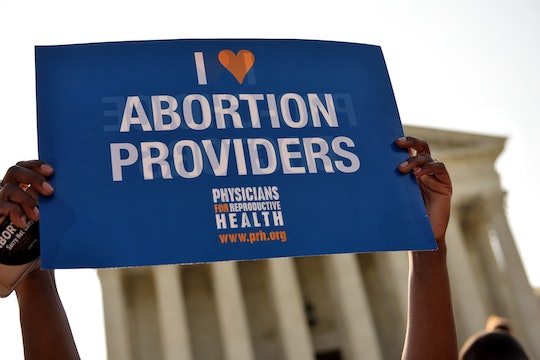 They did it. Just when you thought the Supreme Court was doomed to deadlock, it just issued a major ruling, and a major victory, to women who want access to reproductive healthcare in the state of Texas. In light of the landmark victory for women across the country, here are a few of the best reactions to the Supreme Court abortion ruling, which struck down Texas' restrictive anti-abortion measures.

The Texas law required abortion providers to be an equipped surgical facility and to have admitting privileges at hospitals, regulations that women's healthcare providers like Whole Women's Health said would shut down about 75 percent of the state's clinics, "...meaning 900,000 women of child-bearing age would need to drive more than 300 miles round-trip to reach a clinic that provides abortions," NPR reported.

Monday's majority opinion, written by Supreme Court Justice Stephen Breyer, said that that the additional regulations, "...vastly increase the obstacles confronting women seeking abortions in Texas without providing any benefit to women's health capable of withstanding any meaningful scrutiny," according to the opinion, published by the Court.

The ruling found the regulations placed an "undue burden" on women seeking health care services, and is therefore unconstitutional. The ruling overturned a previous decision by the Fifth Circuit court that would have closed all but nine abortion clinics in the state of Texas, according to The Guardian.

The law, which was passed by the Texas legislature in 2013, followed a 11-hour filibuster by Texas lawmaker Wendy Davis, and mirrored similar restrictions placed on abortion providers in states including Alabama, Arkansas, Louisiana, Mississippi, Oklahoma, Tennessee, and Wisconsin, The Guardian reported. But, as the Washington Post pointed out, other state regulations limiting abortion aren't automatically overturned because of today's decision. Still, the precedent established will undoubtedly be used to weaken the arguments that similar laws and regulations would be constitutional in other states.

The justices who dissented were Chief Justice John Roberts, Justice Samuel Alito, and Clarence Thomas. The three ladies on the bench voted with the majority opinion to strike down the Texas restrictions.

The Washington Post also reported that, even though the ruling is a major victory, it's going to take time and money to get the clinics that were closed as a result of Texas regulations up and running again. So despite the fact that the law was unconstitutional, much of the damage has already been done.

“We can’t reopen clinics overnight,” Amy Hagstrom Miller, chief executive of Whole Woman’s Health said, according to the Post. “We’ve had to give our leases up, we’ve had to sell our facilities, the equipment. Our staff have been laid off. Our physicians have gotten new jobs."

But, while there is still much work to be done in the fight to protect women's reproductive rights, Monday was a day for celebration. And here are some of the very best reactions from social media to mark the occasion.

Monday was a big day for American women who want control over their own bodies and reproductive health. The 5-to-3 decision was the biggest since 1992's Planned Parenthood v. Casey decision which struck down laws which created an "undue burden" for women to access abortions, according to the New York Times. For many women this is the first time in their lifetime their rights have been upheld by the highest court. And based on the reaction, women everywhere are savoring the win.