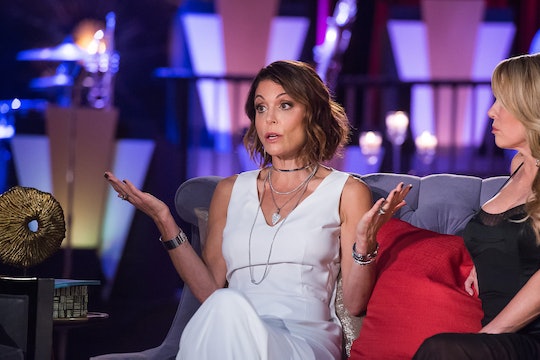 Hoo boy! Was that ever a start to a reunion! On Wedesday's Real Housewives of New York Reunion Show Part 1, tensions between Luann de Lesseps and Bethenny Frankel were at an all-time high. Considering the ups and downs they've been through this season, that is certainly saying something. Going over just some of the things they've said to each other, at some point, Bethenny Frankel is accused of slut-shaming Luann de Lesseps, and she didn't exactly deny it. (Romper reached out to Frankel for further comment regarding the "slut-shaming", but did not hear back at the time of publication.)

The reunion began calmly enough, but it was obvious straight out the gate that Luann was none too pleased with Bethenny. At every opportunity, Luann snuck in a barb at her. When Andy asked the women to raise their hands if they felt that Bethenny had copied Lu's do and no one did, Luann snarked, "They're afraid to raise their hands because they'll get cut off." But things didn't really get heated until Andy brought the recap to Dorinda's disastrous dinner party in the Berkshires, where Bethenny called Luann a "slut" and a "whore" not once, but several times. "The real hypocrite in the room is Bethenny," Luann declared, saying that Bethenny had started sleeping with her current boyfriend before he was separated from his wife and living at home. Bethenny's response? "There isn't a man in Manhattan you haven't slept with." Woah, there.

Andy, the adult in the room, asked "How is that not slut-shaming?" Bethenny started to repeat her earlier claims that she's just calling out Luann's hypocrisy but then as the situation escalated, eventually threw her hands up in the air and said fine, then she was slut-shaming. She continued by saying to Luann "There's not a man you've been out with that you haven't slept with," and that she "behaves like a complete whore when she's out. I think it's disgusting the way she acts." I'm not condoning Luann's obviously defensive tactic of trying to paint Bethenny as a home-wrecker, but I cannot in good conscious as a card-carrying feminist be in any way okay with Bethenny's words here. Just so we're all clear, this is 100 percent slut-shaming and no, Bethenny, it is not okay.

Bethenny then pulled out what she obviously considered her ace, and actually called her boyfriend's daughter who confirmed that Bethenny didn't start dating her dad until after her parents were separated. The whole mess ended with Luann calling Bethenny "evil." Is that better or worse than "whore"? I don't know, I'm just exhausted you guys.