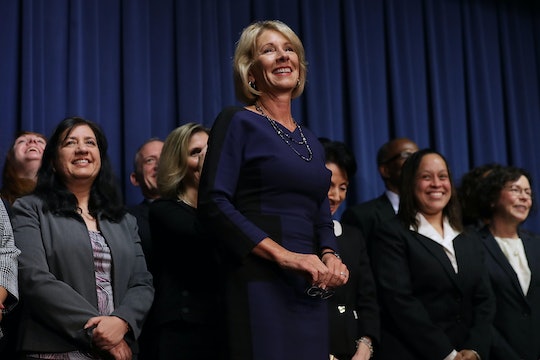 Betsy DeVos has talked a lot about parents having more choices so they can send their kids to the best schools. She's also talked a lot about partisan politics and big government not being the solution to giving American children what they need. But one important element of the education system that tends to get lost in the shuffle is how DeVos feels about public school educators. Here are some Betsy DeVos quotes on public school teachers.

And with federal money being taken away from public schools to fund charter school vouchers, it's safe to assume that public school teachers will be impacted. Neil Campbell, a spokesperson for The Center for American Progress, tells Romper about how cuts to public schools impacts teachers:

About 80 percent of all school spending — from local, state, and federal sources — is on school staff: principals, bus drivers, counselors, librarians, kitchen staff, and superintendents. So cuts to schools will just about always mean fewer teachers and other staff members.

Then there's that bit about Democrats not wanting to reform tenure laws. Even if public school teachers get a modest salary increase under DeVos, that hardly matters if they no longer have job security. Turnover rates are high at charter schools, where just 7 percent of teachers are in a union, compared to nearly half of public school teachers. "And in most states, charters do not participate in pension systems," Campbell says.

DeVos showed respect for public school teachers during her speech, noting that "teaching is hard," according to the Post. "It takes a lot of skill. Not everyone who tries can do it well. We need to admit that and act accordingly."

But what does teaching well mean to DeVos? Are we looking at the teachers whose students scored well on tests? Whose students' test scores increased dramatically from previous years? Or ones who could connect to their students; who listened and talked to their concerns beyond how to take a test?

DeVos pushed for years for school choice in Michigan, which is home to many charter schools (not all of which are successful).

Caleb Harlow, an elementary and special education major, wrote for The Odyssey that as charter schools began to outnumber public schools in Detroit, public school teachers suffered. "In Detroit, as the public school system fought to survive, teachers were let go, staff benefits were cut, and entire schools were closed."

DeVos has always stated that she puts children first when it comes to educational policy. But teachers need to be next in line.