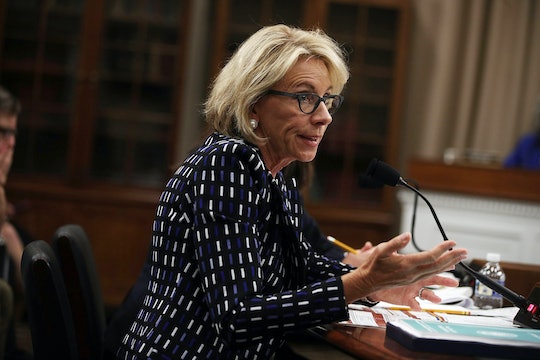 Remember the good old days when we were able to go weeks at a time without another front-page political scandal? Yeah, me either. With President Trump in the White House for well over 100 days, now, it's starting to seem as though each morning brings with it more news about Russian interference in the election, a fishy charity donation, or another cabinet member doing something unsavory. And while many weren't thrilled with the confirmation of Trump's secretary of education back in February, the staunch Republican has continued to make headlines for her controversial views, months later. Most recently, Betsy DeVos' response to an LGBTQ rights question prompted even more doubts about her abilities in her new position — and to say the exchange left a lot to be desired is perhaps an understatement.

Speaking at a Senate Appropriations subcommittee hearing Tuesday afternoon, DeVos was asked some serious questions about what her voucher program would mean, logistically, for minority rights in United States schools. In essence, DeVos wishes to "invest millions into an unprecedented expansion of private-school vouchers and public-private charter schools," as USA Today explains. However, critics worry that religious private schools receiving federal funding would discriminate against students who they feel shouldn't be allowed admission. Specifically, they argue that DeVos' program would literally pay schools to refuse to let LGBTQ students in, and her answer on Tuesday to that specific question didn't really help clear things up.

Romper has reached out to the Department of Education for a comment on these reports and is awaiting a response.

After stating that she believed schools who received federal funding would be required, by law, to follow any and all federal mandates, Democratic Sen. Jeff Merkley of Oregon pressed DeVos on the issue again, and her answer to his line of inquiry wasn't exactly satisfactory.

"On areas where the law is unsettled, this department is not going to be issuing decrees," she said, according to CNN. "That is a matter for Congress and the courts to settle." In other words, DeVos indirectly stated that she would not stand in the way of schools who want to discriminate against non-heterosexual students.

And while DeVos has repeatedly claimed that she is firmly against discrimination, the issue lies in the fact that federal law regarding LGBTQ students does, in fact, remain unclear: Even though Title IX makes it illegal to discriminate "on the basis of sex," there are still numerous debates happening across the country about what that even means.

DeVos' refusal to stand up for LGBTQ students — in even the smallest of ways, as she proved on Tuesday — makes it pretty clear that LGBTQ rights and protections aren't top priorities of this administration.