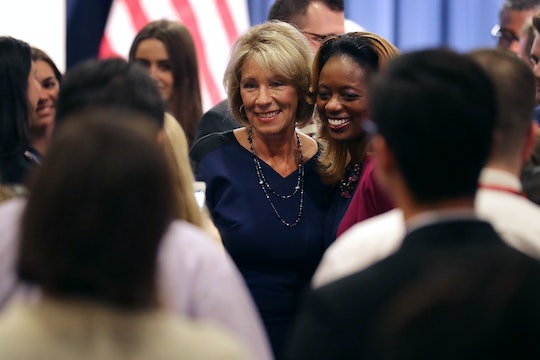 Betsy DeVos' Tweet On Her First Day Is Ironic

On Tuesday, Michigan billionaire Betsy DeVos was finally confirmed as our nation’s next education secretary. With her stated interest in diverting public education funding to private and parochial schools, and despite concerns over the garbled answers she gave to basic education policy questions posed during her confirmation hearing, DeVos' was easily one of the most contentious Senate confirmation processes in U.S. history. Still, she's now responsible for setting funding and policy for millions of public school classrooms nationwide. But on her first day on the job, DeVos tweeted a message to her 100,000 followers that showed — once again — that she’s missing the entire point of the job.

I called it a contentious process, but that’s putting it mildly. Parents and advocates familiar with DeVos’ track record on education reform in her home state of Michigan — and thousands more who learned about her positions on school choice and education funding from her highly meme-able, but poor performance in front of the Senate education committee — expressed deep reservations about putting her into the office. More than one million emails weighing in on DeVos’s nomination poured into Congressional offices, according to Politico, with tens of thousands of phone calls clogging the Capitol switchboard in the days leading up to the final vote.

In the end, the Senate tied 50-50 over DeVos' nomination, with Republican Sens. Susan Collins of Maine and Lisa Murkowski of Alaska opposed DeVos’ nomination, and Vice President Mike Pence delivering the tiebreaker vote.

DeVos barely scraped by, to be sure. According to the agency's website, she spent some of her first morning in office meeting with her new staff and talking with them about overcoming all of that opposition to "unite around a commitment to the rising generation" and "put the needs of our students first." Later, DeVos tweeted another quick message capping off her first day:

Day 1 on the job is done, but we’re only getting started. Now where do I find the pencils? :)

To the new education secretary, it probably seemed like an innocent message — just a friendly note commenting on her first day in the office. But public school teachers and parents know different.

I’m one of those parents. Right now, on my refrigerator (alongside my 6-year-old daughter’s best artwork) are three lists: a list of snacks approved for the 22 kids in her kindergarten class, a list of important dates over the next few months at her school, including a few PTA fundraisers, and a wish list of the supplies her teacher needs for the school year.

I’ll admit, that third list ticked me off when I first saw it. In her four years at a private preschool, my daughter’s day-to-day school supplies had always been covered by our hefty tuition checks. But a few weeks before she entered kindergarten at a public school, our family got our first lesson in the reality of public schools: Supplies often aren't included. In addition to the uniforms, bookbags, and normal back-to-school stuff our family would buy, we also needed to chip in on a variety of other materials to help her class run smoothly. Things like Clorox wipes, paper towels, crayons, paper, scissors, and pencils were always in short supply and not covered in our district's over-stretched public school budget.

The more that I talked to my daughter's teacher about it, and to several of my friends who are public school teachers in other states, the more I began to understand that as much as our family was spending, teachers often shoulder even more supply costs themselves. According to a TIME magazine report, public school teachers in the U.S. spend an average of $500 per year on school supplies for their own classrooms — and shelling out upwards of $1,000 is not unheard of.

And, as one might predict, the poorer the school district, the more of the classroom costs that teachers are forced to absorb. All told, according to an Education Market Association study cited in the TIME report, teachers are forced to pay more than $1.6 billion dollars for items as basic as pens and notebooks for their students.

This is the context under which the new education secretary is taking office. And this is why when I saw DeVos's tweet about her first day on the job, it struck a nerve.

So honestly, before DeVos unleashes her plans for education on the unsuspecting students of America, she needs to show the kind of initiative, curiosity, and basic respect that we would want any child to show in the classroom. She needs to study. And while she’s taking notes from the thousands of underpaid, under-appreciated public school teachers in this country, well, she can do what those teachers and millions of families are forced to do these days: she can buy her own damn pencils.