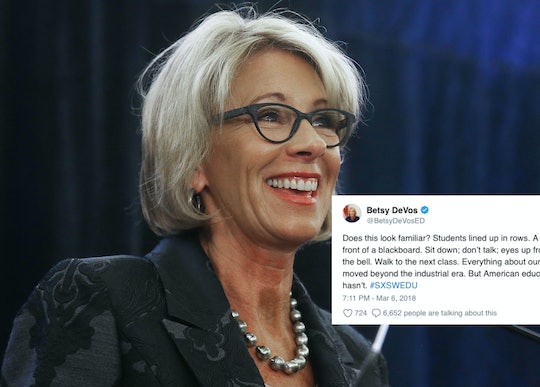 Betsy DeVos has always been super public about wanting to expand alternatives to traditional public schools. It's her number one priority, and she's infamous for attacking the public school system because of it. In her latest critique, she really riled up Twitter users who are saying that she — the government official serving as the 11th and current United States secretary of Education — needs a lesson on education herself. DeVos used a picture available on Shutterstock as an example of poor teaching practices in U.S. schools today, and teachers are accusing her of misrepresenting their classrooms, according to The Washington Post.

The photos and content of her tweet came from a presentation she made at the SXSW EDU conference in Austin, Texas, The Washington Post reported. In her speech she said:

Most students are starting a new school year that is all too familiar. Desks lined up in rows. Their teacher standing in front of the room, framed by a blackboard. They dive into a curriculum written for the 'average' student. They follow the same schedule, the same routine — just waiting to be saved by the bell. It’s a mundane malaise that dampens dreams, dims horizons, and denies futures.

But teachers are taking to Twitter to let DeVos know that many public schools are radically different than they were back in the day, and that even basic classroom design is not what DeVos so adamantly says it is.

"You have no idea what you are talking about," one Twitter user responded "My classroom is 1500 square feet with nine foot lab tables and stools on which we rarely sit. I teach in an elementary STEM lab."

Another asked: "When is the last time you were in a school? We are all desperately working hard to innovate. I haven’t seen a room like this in ages! Get with the modern education times!"

And another said: "Go to Shutterstock. Search 'classroom.' This is the first image that pops up in the feed. I sense my next lesson on #medialiteracy Thanks @BetsyDeVosED for the teachable moment (sarcasm)."

One teacher added that the stock photo is unfamiliar. They tweeted in response: "In my classroom, and many others (that you probably don’t know about) students are the agents of their own learning and often are the ones up in front of the class teaching and learning with each other."

Here are a few notable clap backs of what public schools really do look like:

At Betsy DeVos's confirmation hearing, Sen. Bernie Sanders had asked her, "Do you think if you were not a multibillionaire, if your family had not made hundreds of millions of dollars of contributions to the Republican Party, that you would be sitting here today?" according to CNN.

Given her wealth, DeVos is often criticized for being far removed from many of the challenges facing the working families whose interests she is supposed to understand. And she hasn't been making much of a case for herself, especially given her recent 60 Minutes interview with Lesley Stahl. The U.S. Education secretary appeared to know very little about education in the United States, according to Fast Company.

Twitter users are urging DeVos to start visiting more public school systems, talk with more students and parents of students, and spend more time with families whose challenges she's supposedly undertaking. Following her stock photo tweet, she DeVos now has more invites to schools around the country than she could probably visit in a school year.

And the hashtags #NotMyClassroom and #MoreThanAStockPhoto are taking the social media platform by storm. Maybe DeVos will catch on and pay a few visits before tweeting anymore stock imagery.