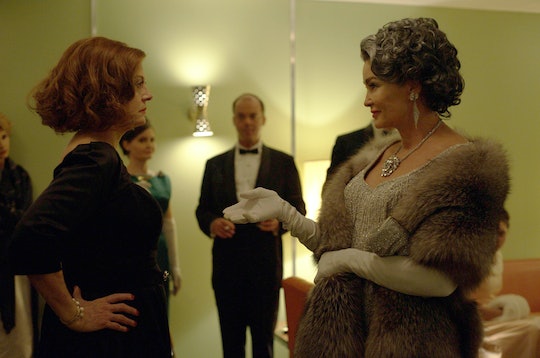 In Feud: Bette and Joan, "And the Winner is... (The Oscars of 1963)" tackled the Oscar race, when the nominations drove Bette Davis and Joan Crawford even further apart. Bette earned a nomination for her role in What Ever Happened to Baby Jane? but Joan did not, and many assumed that Bette was the clear winner in the category. However, Bette Davis didn't win an Oscar for Baby Jane on Feud and her loss may have been thanks to her co-star.

Joan and gossip columnist Hedda Hopper conspired together to poison the voters against Bette, but did so without connecting Joan to it so she wouldn't get any negative press. Hedda called up Academy voters and disparaged Bette, while Joan called around to talk up the other two nominees with the best chance of winning: Geraldine Page, who was nominated for Sweet Bird of Youth, and Anne Bancroft, who was nominated (and won) for The Miracle Worker. By decreasing Bette's chances and increasing the other women's, Joan may have snatched the Oscar right out of her hands.

But Joan didn't stop there. She also went to Geraldine and Anne and said that if they could not attend the awards, she would be happy to accept on their behalf. Not only did Joan ruin Bette's chances, but she also stole the spotlight from her. On top of losing to Anne, Bette had to watch her co-star accept the award she felt was hers.

Perhaps the most heartbreaking part of the episode was watching Bette break down after her Oscar loss. She felt winning the Oscar was her last chance to establish herself as a major player in Hollywood like she was in her youth, but that last shred of hope was taken from her in the cruelest way possible. The silent devastation on her face as Joan went up to accept the award spoke volumes about how much it had meant to Bette and how deeply she was hurt both by the loss and by Joan's betrayal.

And, ultimately, Joan's "victory" was a hollow one. She didn't actually earn anything; she merely piggybacked on someone else's success. Neither the award nor the acclaim were really hers. All she succeeded in doing was vindictively making someone else unhappy in an attempt to assuage her own pain. Jessica Lange's performance made Joan's pathos incredibly moving, but didn't distract from the spitefulness of her actions.

On Feud, neither Bette nor Joan were winners at the 1963 Oscars. Joan's sabotage robbed them both of the chance.