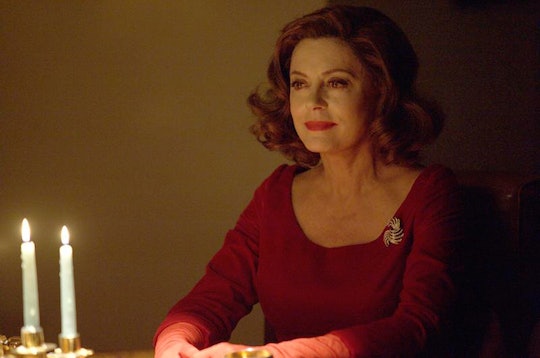 'Feud' Puts A Spin On An Iconic Bette Davis Quote

No one could ever argue that Joan Crawford and Bette Davis were good friends. But if Ryan Murphy's Feud has taught us anything this season, it's that there was a lot more to this relationship than meets the eye. It may be easy to look at the many numerous quotes and snide remarks they said about each other and assume there was nothing but hatred there, as simple as that. However, during the finale, Bette Davis' response to Joan Crawford's death proved that the iconic insult may not have been quite as cut and dry as it seemed.

I remember before the show started, looking back on all the abrasive comments the two acting legends had said about each other, and the one regarding Crawford's death always stuck out to me as being particularly biting. After Crawford's death, Davis is quoted as saying: "You should never say bad things about the dead, you should only say good… Joan Crawford is dead. Good." It's a harsh remark for sure, though when I saw it put into context in the finale, I came out feeling slightly different about it. Because while it certainly sounds like a cruel thing to say when someone dies, the statement seemed to serve as more of a cover up to hide how sad Davis was to hear of her former coworker's death.

Susan Sarandon did a spectacular job of saying a very similiar statement as the one above — pretty much word for word — and yet my takeaway wasn't hatred. She said what she thought the press would want to hear: that the great Bette Davis thought very little of Joan Crawford's death. But you could tell that it was hard for her to even get the words out. For me, she didn't really mean what she said. She was just caught off guard by the news and resorted to sarcasm and wit to mask the pain.

Maybe I'm reading too much into this small moment, but Sarandon did an incredible job of delivery empathy even during this hurtful remark. Davis may have found herself succumbing to old habits by making a jab at Crawford, even in death, but what she felt behind closed doors and away from the media was a different thing entirely. This probably wasn't the way it went down in real life. Truth be told, we'll never know exactly how these two women felt about each other, but I like the hopeful implication that Murphy leaves us with. And I'll never look at that quote the same way ever again.