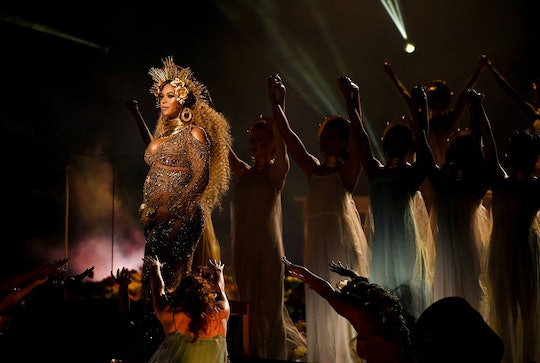 Beyoncé Announces Her Twins' Birth With A Glorious Photo

Praise Bey! In the early morning hours on Friday, the Queen herself, Beyoncé, finally announced the birth of her twins, Sir Carter and Rumi, with arguably the most iconic photo ever. Within minutes, the Instagram photo had racked up thousands of likes and comments, proving that, for dedicated fans everywhere, the moment had been a long time coming.

"Sir Carter and Rumi 1 month today," the singer wrote in the caption of a beautiful snapshot featuring herself holding the twins. The image echoed her initial pregnancy announcement from February, in which she knelt before a wreath of flowers and greenery, wearing a mismatched set of lingerie and sheer green veil, cradling her bump. In her announcement on Friday, Beyoncé similarly wore a flowing purple, blue, and pink floor-length robe from Palomo Spain (a gorgeous, gender-neutral high-end brand), bright blue lingerie bottoms, and an aqua-hued sheer veil, and stood before the same floral wreath, the twins nestled in her arms sleeping.

The announcement followed closely on the heels of reports that the singer had been spotted out with her husband, rap mogul JAY-Z, for the first time in months. According to E! News, Beyoncé "stepped out in public for an intimate date night" on Wednesday, dining at Nobu in Malibu, California, where the family currently resides. The appearance, unsurprisingly, sent the Beyhive into overdrive.

And who could blame fans, really? News that the star had given birth first broke back on June 17, just days after she had welcomed the duo into the world, as we now know. (Given the caption on Queen Bey's stunning Instagram photo, we know that she likely gave birth on June 13.) Since then, fans have had to resign themselves to leaked tidbits of information from various unnamed sources. Reports claimed first that the twins were forced to stay in the hospital for a while due to a minor condition, which TMZ later claimed was jaundice. The outlet reported that the infants had been kept "under the lights", a common practice meant to lower bilirubin in the blood.

In the weeks that followed, fans also learned the babies' names (Sir Carter and Rumi) when it was leaked that the couple had registered to trademark the monikers.

Sir Carter and little Rumi join big sister Blue Ivy Carter, Beyoncé and JAY-Z's 5-year-old daughter, who was born back in January 2012. Given the massive outpouring of excitement and enthusiasm in the comments section of the singer's Instagram post on Friday, it's safe to say the newest additions are already plenty loved by family and fans alike.

Congratulations to the happy family!