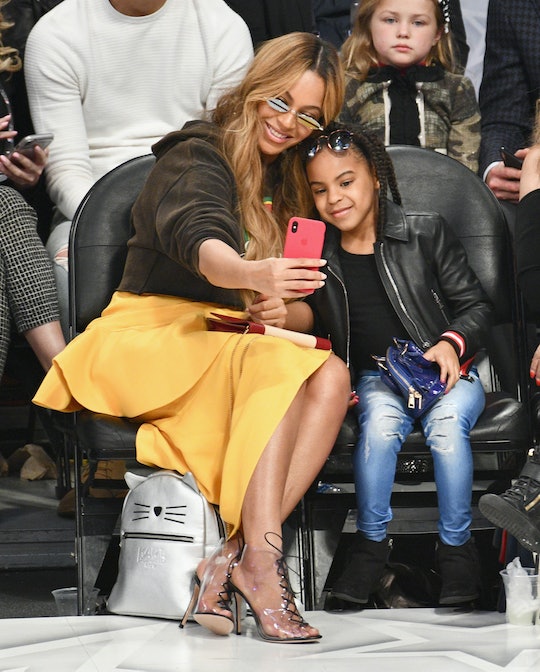 Beyoncé may have broken the internet when she announced back in 2017 that she was pregnant with twins, and though we may not see them often, little Rumi and Sir are definitely already an iconic duo thanks to their celebrity lineage. Long before Queen Bey was posing in maternity undies and a veil in front of a floral arch though, there was Blue Ivy, the OG Knowles-Carter child, who is already far cooler than most humans on the planet. And it's pretty clear where she gets it from. In her mom's latest Instagram post Beyoncé and Blue Ivy are the definition of twinning and it's so sweet to see how the 7-year-old is turning out to be Beyoncé's mini-me.

On Thursday, Beyoncé took to social media to post a side-by-side photo of herself at 7 years old along with a current photo of Blue Ivy, and wrote "Someone made this comparison of me at age 7 and Blue at age 7." Though both photos are a bit grainy, Blue definitely seems to her mom's spitting image: they seem to share the same features and facial expression, as well as the same amazing hair. But it's clear that Beyoncé had a bit more on her mind than pure comparison. In the caption, she added, "My baby is growing up."

As any parent knows, it's always bittersweet when you realize how much bigger your child has become — though you want to marvel at how much they're growing and how different they are, it's hard to think about how quickly it seems to actually happen. In fact, it probably doesn't even feel that long ago to to Beyoncé that *she* was the 7 year old in the photo, and yet, here is her lookalike daughter, already at the same stage in life.

It may not have just been the photo that made Beyoncé realize just how grown up her daughter really is, though. In her previous post, the singer posted a series of photos of herself wearing a striped jumpsuit, and in the caption, Beyoncé gave a photo credit to none other than Blue herself. And let's be honest, realizing your child is now old enough to take Instagram photos of you worthy of being shared with millions of followers? That would definitely be a reason to reflect on how quickly time is flying.

But as much as the similarity between mom and daughter is causing fans to freak right out, there's actually another significant reason why the post caught people's attention. And that's because it appears Beyoncé may have actually decided to start using Instagram captions.

Even though Beyoncé clearly embraces Instagram when it comes to sharing outfit photos, tour videos, and other notable moments from her daily life, Harper's Bazaar noted that she rarely actually captions her posts. This could be because she's Beyoncé and thus, probably has an assistant or five to help keep her social media posts on point (and if so, she'd probably rather not have them speak on her behalf). Or, it could just be that she doesn't feel the need to offer any context for the images she shares. Either way though, it means Beyoncé latest post about Blue is extra special, and Twitter *definitely* took note:

In other words, as the person who, at 7 years old, not only literally manages to take Instagram-worthy photos of Beyoncé, and inspires her to share a rare caption with the world, it seems the evidence clearly points to Blue as being the real GOAT.

In fact, given the uncanny similarity between the mom-and-daughter duo, is it really all that outlandish an idea to think that maybe Queen Bey just went ahead and cloned herself? Only time will tell.