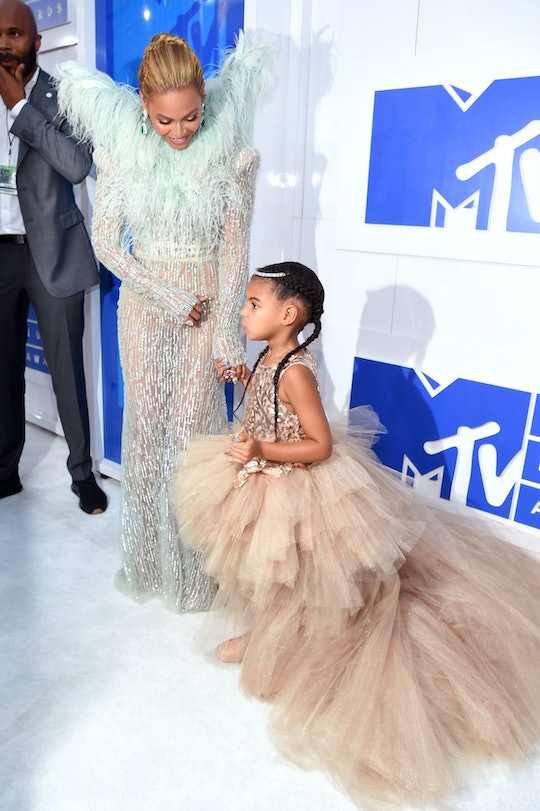 Beyonce Brings Blue Ivy To The VMAs & The Two Are Angelic

MTV's Video Music Awards are always guaranteed to entertain, even before the show starts — and this time, it was Beyoncé's fans who were blessed with something special. During Sunday night's big red carpet, Beyoncé brought along her adorable daughter Blue Ivy, both dressed to the nines in fairy wings, tiaras, and glimmering gowns. On an evening where the singer was nominated for 11 separate awards, the duo could have shown up wearing just about anything and it might have sent tongues wagging — but when was the last time Beyoncé ever didn't bring her A-game?

It was a big day all-around for the pop star, whose nominations included a coveted Video of the Year nod and two (count 'em — two) nods for Best Choreography. Earlier in the day, MTV confirmed that Beyoncé would indeed be taking part in the show later that night, after rumors circulated that she would be performing a Prince tribute during the ceremony alongside such stars as Rihanna, Ariana Grande, and Nicki Minaj. Although the Prince tribute itself wasn't confirmed, the entertainment outlet posted an excited tweet to its official account with several lines of lemon emojis and the phrase, "BEYONCÉ PERFORMING #VMAs."

According to Mic, the feather getup was designed by Francesco Scognamiglio and was plucked (no pun intended) from the designer's Fall 2016 couture line. Blue Ivy's rose gold, sequined tulle gown was equally as stunning, although perhaps the best part was the blush-pink high top sneakers peeping out from beneath the voluminous skirt.

"A queen and her princess," one fan lovingly dubbed the duo on Twitter. The Beyhive in general seemed enthralled with the look, jumping in to post its approval:

Queen Bey captured the attention of a few notable celeb followers as well. "This is giving me so much life," Orange is the New Black star Laverne Cox wrote in the caption of an Instagram post. "Beyoncé and Blue Ivy Carter... slay or you'll get eliminated."

Perhaps the best part of the singer's appearance on the red carpet Sunday night though was her entourage: Blue Ivy in tow, Bey led a crowd of mothers with recognizable faces — the mothers of black men and women slain by police in recent years. Walking the carpet with the Beyoncé were "Wanda Johnson, mother of Oscar Grant; Gwen Carr, mother of Eric Garner; Sybrina Fulton, mother of Trayvon Martin; and Lesley McSpadden-Head, mother of Michael "Mike" Brown, Jr.," according to Billboard.

Despite the fact that Beyonce and Blue Ivy could have easily stolen the show on their own, having a crowd of incredibly fearless moms to back them certainly didn't hurt.