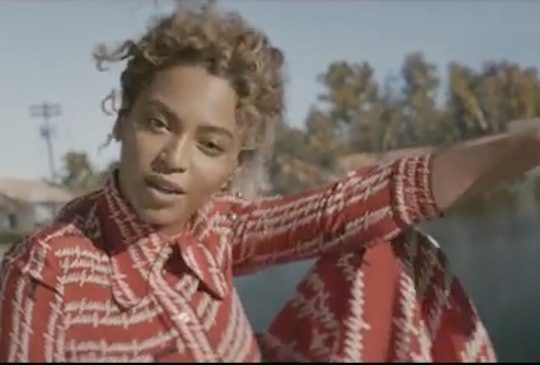 Beyonce "Formation" Song & Video Are The Answer To All Our Prayers

Bless this day. As if news that Beyoncé was performing in the Super Bowl wasn't enough, Beyoncé's "Formation" song and video released a day before the Big Game and it's the beloved answer to all our beautiful Beysus-themed prayers. (OK, at least mine.) Queen Bey is, obviously, the Queen Ruler of our mortal world, and also the queen of dropping super top-secret songs and albums before there's even time for the press or the media to get a whiff of what she's up to, so really, the release of "Formation" should come as no surprise. There were muffled hints that the "Formation" would come before the Super Bowl halftime show, but there was never a confirmed word on when or how that'd be. But now that the song is here I am filled with a happiness even I didn't know existed.

"Formation" opens with Bey standing on top of a police car in the middle of what looks like a flood, and her opening includes with a parental warning message, then she says: "Y'all haters corny with that Illuminati mess." It's probably the most wonderful opening she could've given to the song, given that there's been speculation (both serious and humorous) that she and Jay are its crowning members. Bey then calls out the paparazzi, natch, and then, surprise of all surprises, the camera pans straight toward Blue Ivy.

In the song, Beyoncé sings about her relationship with Jay, her daughter, and her parents. The beat is a nod to the gritty style that worked so well for her on tracks like "***Flawless" and the song is flooded with both pop culture and political messages as well as commentary on the #BlackLivesMatter movement, with images of Martin Luther King, Jr., the setting (a post Hurricane Katrina NOLA), a graffiti wall that reads, "Stop shooting us," and a nod to Trayvon Martin — evidenced by a black boy dancing in front of police officers in riot gear who then place their hands in the air — very clearly placed in the video. The song is also a celebration of the power Bey commands (nothing makes that clearer than when she says, "I might just be a black Bill Gates in the making"), and I love that she is both forceful enough to commend her own talents while simultaneously calling out the ways black culture has been victimized at the hands of society at large.

It's also worth noting that Beyoncé sings most of the song atop a police card submerged in a flood and with the images left behind in the wake of Hurricane Katrina, Bey is very clearly using her song as a platform to discuss the social injustices of that moment. As the police car sinks at the end of the song you can very clearly read "New Orleans Police" on the windshield.

You can watch the video below (spoiler: it's the dirty version):

Aside from the Blue Ivy surprise, Beyoncé didn't just release the song on Tidal. (A bit of a shock, but also the best thing ever because that means we can all watch it very happily on repeat from the comfort of YouTube, so bless you, Beyoncé, for blessing us.) Though the song's primary home was Tidal, the video was released to YouTube, which meant that fans could listen for free without having to be members.

To finish the whole song off, she sings: "Always stay gracious, best revenge is your paper." Which, true.