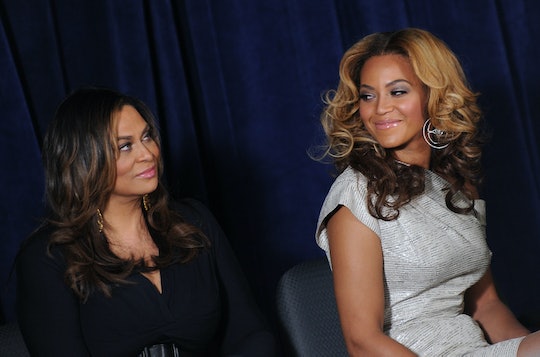 Ever since Beyoncé and JAY-Z welcomed their twins, people have been waiting on pins and needles for photos and updates about them. The parents, however, have refrained from revealing too much about their kiddos. Beyoncé's mom, Tina Lawson, on the other hand, has shared some sweet updates. Most recently, Lawson revealed that Beyonce and JAY-Z's twins are already showing off their unique personalities, and it's such a sweet update to hear about the most mysterious and tiniest members of the Knowles-Carter family.

Beyoncé gave birth to her twins — daughter Rumi and son Sir — in June 2017, according to Us Weekly, and following their arrival, she was pretty silent. After spending months updating fans about the size of her bump with some seriously stylish Instagram posts, she took some much needed time off, away from the spotlight, to be a mom to her twins and 7-year-old daughter, Blue Ivy. Since going on tour with her husband last summer, however, Beyoncé did share some new photos and video clips of her smallest additions, according to Harper's Bazaar.

But with everything she shares (and doesn't share), fans are always dying to know more. And thankfully, Beyoncé's mom was willing to spill some of the beans about the twins earlier this week.

In a new interview, Lawson revealed to Us Weekly that the twins are filled with personality. "The girl is going to rule the world, and the boy is kind of laid back and chills like the dad," Lawson told the publication.

It sounds like the twins are exactly like their parents. Everyone is well aware that Beyoncé practically rules the world already, thanks to her incredible music, epic performances, and, of course, the fact that she has a song about this called "Run The World (Girls)".

Meanwhile, the fact that Sir sounds like such a low maintenance baby and takes after his dad is all kinds of adorable, even if JAY-Z is just as powerful as his wife, and also a serious businessman.

Don't worry, Grandma Lawson didn't forget about Blue Ivy. In the same interview, Lawson told Us Weekly she rules the house, at least, next to her mom, anyway. "She's the Queen B," Lawson said. "The second Queen B."

Although these updates don't come often, fans are desperate to hear any kind of sweet details about Beyoncé's twins.

While Beyoncé has remained silent about the twins, she did open up to Vogue for the first time about them this past August. In the cover story, Beyoncé got real about how her pregnancy with the twins had a huge impact on her body, saying:

I was 218 pounds the day I gave birth to Rumi and Sir. I was swollen with toxemia and I had been on bed rest for over a month. My health and my babies' health was in danger so I had an emergency C-section. We spent many weeks in the NICU. My husband was a soldier and such a strong support system for me.

With that in mind, it makes sense why Beyoncé would want to spend some intimate time with her twins. But now that the twins are about to turn 2 years old in June, hopefully Beyoncé will share more about them in the coming months.

But, until then, we can count of their grandma to share some sweet deets every now and then.