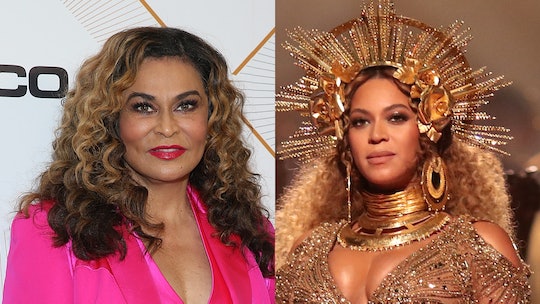 This weekend, Beyoncé and Solange's fabulous mother, Tina Lawson, celebrated her 65th birthday. Her husband, Richard Lawson, threw her a lavish surprise party, of which a few photos and videos have been shared on Instagram. And in one video, it's clear that Beyoncé stole the show at Tina Lawson's surprise party — but in a good way.

As seen in a video that Tina shared to Instagram (which she re-grammed from a Beyoncé fan account), Beyoncé led the partygoers in a rendition of "Happy Birthday" to Tina. Surrounded by cameras, lights, and a beaming JAY-Z, a giggling Beyoncé took the microphone to sing the birthday song to her mother. By the end of the first line, she used her hands to summon the crowd into singing along with her. I can only imagine that everyone there would have preferred to remain quiet, so as to hear Beyoncé's voice carry the entire song — but the party was all about Tina, so it was pretty cool of Bey to make sure she didn't steal the entire spotlight.

Tina shared plenty of other posts from the party, but only one other with Beyoncé. She posted a "Tina's Birthday"-personalized photo booth strip featuring three photos of herself and Bey posing in crowns, and the two looked adorable in each shot.

On Instagram, Queen Bey appeared in a few other images from the party. Several fan accounts shared a selfie of Beyoncé and actress Debbie Allen at the soirée.

Fans also shared footage of Tina at what I would guess is the beginning of the party, right after she was surprised. In one video, Instagrammed by @beyonceindo, Tina is seen hugging both Beyoncé and Julez, who is Tina's grandson and Solange's son.

I haven't been able to find any photos of Solange at the party, but whether or not she was able to make it, it's clear that she wished her mom a happy birthday. On Saturday, Solange shared three throwback photos of her mom to her Instagram story, in honor of her mom's big day.

Richard Lawson, who threw the party, made an adorable speech to his wife at the extravaganza, which Tina shared a video of on Instagram, as Entertainment Tonight noted. "I am almost impossible to fool so my wonderful hubby Richard did an amazing job of keeping this party a secret that’s major," Tina captioned the video. In his speech, Richard echoed that sentiment. "We pulled this sh*t off! Yo! You know how difficult this is, with Tina Knowles Lawson?" he told the crowd. "Oh my God! Oh my God! Tina is suspicious about lint. 'What the hell was that? Who put that up there?'" he added, jokingly imitating Tina being skeptical about lint.

It's clear that Tina had an amazing time at her surprise party — and having her family there surely meant a lot to her. Hopefully more footage from the party surfaces soon, because I'd love to see if Beyoncé sang anything else for the crowd.