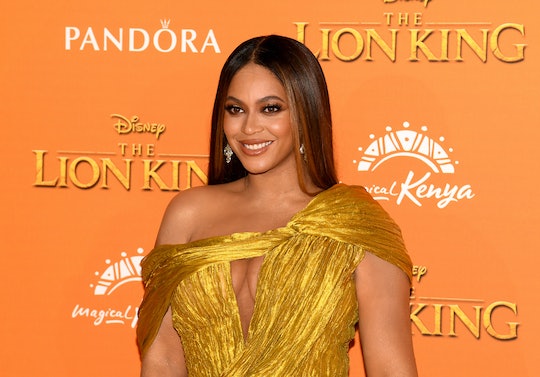 Beyonce's Birthday Wish From Her Mom Is So Incredibly Sweet

Beyoncé's hard work should be recognized every day of the year. But she should especially be recognized for all of her hard work on her birthday aka her Bey-day (see what I did there?). There are so many things to praise Beyoncé for and so many fans who do that daily. But Beyoncé's Mom's birthday wish for her daughter has definitely been the most special one thus far. Bottom line — real recognizes real.

Thank goodness for Tina Lawson. Without her, Beyoncé would have never existed or had the very incredible career that she has to this day. And to imagine a world without Beyoncé and her music is to imagine a world without Starbucks — it just doesn't seem right. So, leave it to Beyoncé's mom to recognize this. In an Instagram post on Beyoncé's 38th birthday on Sept. 4, Lawson took to the platform to share the most touching tribute to her oldest daughter. Her words are all kinds of incredible and are such a testament to what motherhood means to the both of them.

"38 years ago today you came into my life and I know without a shred of doubt that God sent you!!!," Lawson wrote. "I had recently lost my mom and never thought that I could feel that particular kind of love again but seven months later I was pregnant with you...the moment I saw you I knew that that was IT!!!"

If that wasn't sweet enough, the rest of her post is enough to make anyone's heart melt. "You have brought me so much joy and pride and love and friendship," she added. "Your heart is as big as Texas!! You are one of the best moms ever! And I love you soooo much. Have the best birthday EVER!!"

With a message like that how could Beyoncé not have an amazing day? Their bond is truly one unlike any other — and Lawson is the perfect person for Beyoncé to learn from, especially when it comes to being a mom. Beyoncé is the mom to three kids — 7-year-old daughter, Blue Ivy, and 2-year-old twins, daughter Rumi and son, Sir. And seems to be doing such an amazing job as a parent. Fans are well aware that Beyoncé is letting her oldest daughter explore her creative side by singing on some of her recent songs, appear in her Netflix documentary, and co-star in some recent music videos. And while she tends to keep the lives of her youngest kids private, from the sound of Lawson's post, it seems like she is doing an amazing job with them, too.

Between her mom, her kids, and her husband JAY-Z, it sounds like Beyoncé has been surrounded with love for her 38th birthday. And there really is no better way for her to spend it.

There's another reason to be grateful for Beyoncé's mom. Not only does she write super sweet tributes to her daughter on her birthday, but she also shares things about Beyoncé that other people might not know. In August, Lawson told Us Weekly that Beyoncé reasons with her kids when they act out (instead of spanking them) and revealed in February that Beyoncé can't cook. As previously stated, thank goodness for Lawson.

There is no denying that 37 has been such a good year for Beyoncé — and there is no telling what kind of exciting things that 38 will bring.