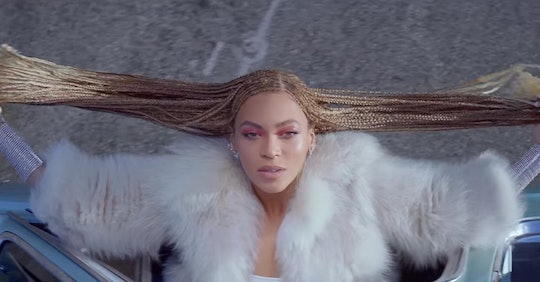 Beyonce's "Formation" Lyrics Are A Reminder Of My Own #BlackGirlMagic

About two hours ago, I got a text that simply read "MARGARET," with a link to a video. I knew instantly that it was about Beyoncé, and I was ready. But I didn't realize just how ready I needed to be. As I watched Beyoncé's all-new "Formation" music video, I lost count of how many times I threw my hand up in the air. I lost count of how many times I screamed, "Yes, we will slay with you." Beyoncé's video is so important, and "Formation" is a song dedicated to #BlackGirlMagic. And I am so glad it's here.

Beyoncé's "Formation" touches on many different topics I could dive into and dissect (the #BlackLivesMatters connection, the post-Katrina commentary, and so much more). But the thing I wanted to make note of — the thing that I wanted to watch again and again and again — was the singer's powerful proclamation of being a proud, powerful black woman. Every single lyric makes clear just how hard Beyoncé has worked for what she has, and just how hard she'll continue to work. And, best of all, she won't ever apologize for that work.

These are all themes that #BlackGirlMagic popularized on social media — a hashtag that proved we are resilient, that we are strong, and that we can own this strength. And I wasn't the only black woman who heard Beyoncé's words — it's as if "Formation" was a black woman's call to arms. Following the release of "Formation," my Twitter and Facebook feeds exploded with my fellow black women thanking Beyoncé for standing in her blackness and slaying, as she sang about it over and over. Her song inspired us all to rise up and to say where we've come from, who we are, and how hard we've worked in order to get what we have. First, Beyoncé gave all of us "Run the World" — now, she's given us "Formation."

After I heard the song for the first time, I thought, This is the blackest thing Beyoncé has ever given us. She wanted us to see that she knows who she is — that she's well aware of and she does not give a damn what you think — and that she didn't get where she's at by sheer luck. As she sings:

I go hard, I go hard

Cause I slay, slay

She worked. (Hello, Destiny's Child.) And she gave. (Hello, Dangerously In Love.) And she gave (hello, B'Day) and gave (hello, I Am... Sasha Fierce) and gave (hello 4). And then she worked some more. (Hello, Beyoncé.) So why shouldn't she get to celebrate her hard work? So often, black women are overlooked and forgotten, but Beyoncé is making sure she reverses that notion. She didn't ask for a seat at the table — she made one. And she never asked for anyone's damn approval to do so, either.

During "Formation," when Beyoncé switched from "And I slay" to "And we slay," I stood up, alone in my room, screaming "WE SLAY!" "Formation" is an anthem for Beyoncé and black culture, but, most of all, it's an anthem for black women. And the response has been amazing. Following the video's release, we're talking about the blood that runs through our veins and the hoods we grew up in. We're holding all of those in our black communities who came before us up high. We're wearing every little thing that's contributed to our blackness proudly. We're letting our black girl magic shine.

#BlackGirlMagic is probably the best hashtag that was created, uniting black women all over the world. And the most beautiful thing to come out of #BlackGirlMagic is this appreciation for self, as black women. In a society that only recognizes our black features and culture, #BlackGirlMagic has encouraged us to own our culture. Black women are becoming even more empowered then they already were — but black women have been slaying for centuries. We simply have more platforms on which to slay. We're taking up more space.

I've been exploring this idea lately — specifically, standing in my greatness as a black woman while saying to myself and those around me, "I'm great! I am good!" I say it, in part, because no one else will. That's not how our country has been built, or how we've been conditioned. Black women have to work 10 times as hard just to be able to sit at the table. And, in "Formation," Beyoncé recognizes this. When I watched this video, I felt like it was about me. For me. Blackness, in all forms, is good. Not only did Beyoncé create her own table — she taught us that we can too, and proudly sit at the head of it.

From the moment "Formation" begins, Beyoncé lets viewers know who she is, and doesn't apologize for who she is. Yes, she's very black. She's proud of this blackness. Her blackness makes her who she is. She's simply the best, and she knows it. This is her response to everything that's ever been said or questioned about her, and she's going to leave it at that.

As she states: "Always stay gracious, best revenge is your paper."