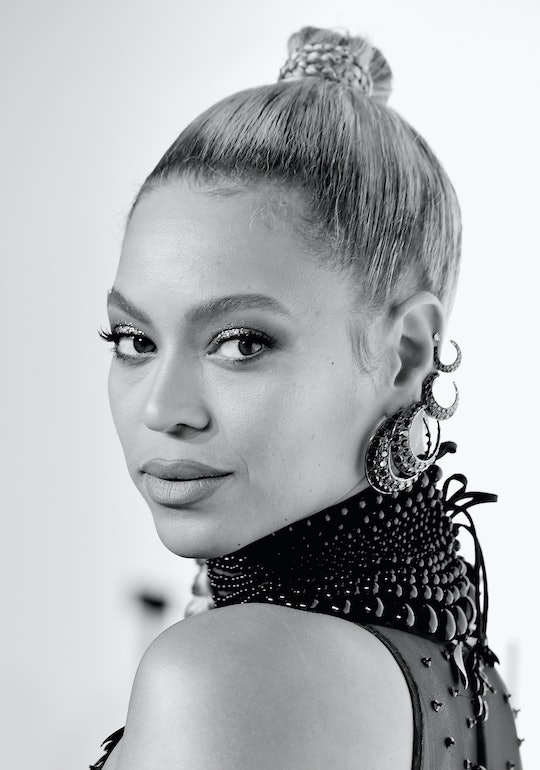 Beyonce’s Maternity Photoshoot Is A Work Of Art

As the world rejoices on the news that Beyoncé is pregnant — with twins! — more stunning maternity photos have emerged from Queen Bey. Beyoncé's maternity photoshoot has to be seen to be believed, as she embraces her inner mother goddess in a series of intriguing, ethereal photos. Beyoncé's official website has transformed into something of an interactive art installation itself, with photos of husband Jay Z and daughter Blue Ivy, interspersed with empowering poetry. Her maternity photos are scattered throughout, featuring color palettes reminiscent of Frida Kahlo. Fans have been completely blown away by the fierce woman power of these photos of a pregnant Beyoncé.

While all of the maternity photos can be seen at her website, the Beyhive has been sharing some of the best shots of Beyoncé all over social media. Here are some of the most stunning.

Blue Ivy looks practically regal as she extends a flower to her pregnant mama, reclined on a bed of flowers. This photo definitely feels like a divine feminine interpretation of Michelangelo's "Creation of Adam" on the ceiling of the Sistine Chapel.

And then there's this stunner of a photo with direct inspiration from Botticelli's "The Birth of Venus," where Beyoncé swaps the scallop shell for a bust of Nefertiti:

Just as in Lemonade, Beyoncé invokes the power of water to capture her own inner goddess in several of her maternity photos. She appears effortless in these photos of her wrapped in lengths of fabric underwater.

Also, can we talk about the makeup she's wearing for a second? I need this amazing waterproof magic makeup like pronto.

Another photo of Beyoncé swirling in scarves is also reminiscent of a Renaissance masterpiece, if you compare this photo to the god Zephyros in Botticelli's "Birth of Venus" in the upper left corner.

In the poem accompanying the photos, "I have three hearts," Shires writes:

That vision is made real in a series of photos where Beyoncé is crowned as a Black Venus herself.

This one looks as though it could have come straight out of the major arcana of the Rider-Waite tarot card deck. Can we say High Priestess meets The Empress, anyone?

With so much depressing news seeping into the American psyche as of late, Beyoncé's joyous pregnancy announcement has been a much-needed moment of just pure happiness. And in the wake of activist efforts like the Women's March, Beyoncé's Mother Goddess maternity photos are an artist way of reminding women to own their power as the goddesses we all are.