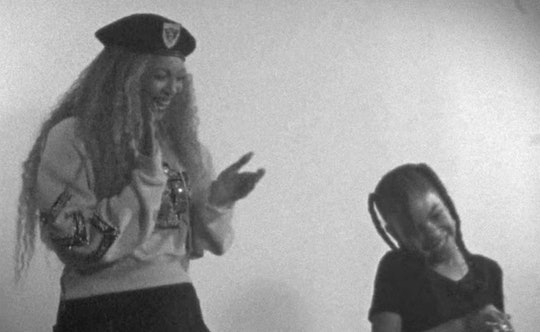 Obviously Beyoncé Has An Incredibly Cute Nickname For Blue Ivy

Beyoncé and JAY-Z's seven year old daughter, Blue Ivy, is a superstar in the making. In Beyoncé's new Netflix documentary, Homecoming, fans get to see a super personal side to the singer and her children. If anyone watched the documentary over the past few days, then they would find out Beyoncé's nickname for Blue Ivy Carter, which is so sweet and personal to their family.

Homecoming focuses on both of Beyoncé's incredible performances at the 2018 Coachella music festival — from the rehearsals, to staging the show — all while she focuses on being a mom to her three children — daughter Blue Ivy and twin daughter and son, Rumi and Sir. In Homecoming, fans get the opportunity to learn a lot about Beyoncé as a mom and finally get another chance to see her adorable kids and their personalities.

Beyonce and JAY-Z's oldest gets her opportunity to shine. In the film she rehearses her mom's choreography (with her background dancers), observes her mom as she gets ready to put on the performance of a lifetime, and even expresses her interest in becoming a performer, just like her parents.

In one of the most heartwarming parts of the documentary, Blue Ivy sings the hymnal, "Lift Every Voice and Sing" while Beyoncé looks on, according to Entertainment Tonight. When she's done, Beyoncé showers her in compliments and reveals a new nickname for Blue Ivy that people might not have heard of before.

Baba?! That is the cutest nickname.

Although it's a little unclear why Beyoncé calls her daughter, Baba, a few things can be assumed. "Ba" is the first consonant sound in her daughter's name, which is probably why they call her "Baba." Not to mention, Blue Ivy is a pretty hard name for a child to pronounce — it's very possible that "Baba" was the only way she knew how to say her name until she got older. Not many people knew that Blue Ivy had a nickname to begin with. After Blue Ivy's birth, Beyoncé's mom, Tina Lawson, mentioned to Access Hollywood that her nickname for Blue Ivy is "Blue Blue" — but that's about it.

Not only did this segment reveal that Blue Ivy has a nickname that fans didn't know about, but it also revealed that the little girl is a natural at performing, just like Beyoncé herself.

"I wanna do that again!," Blue Ivy said after her performance in Homecoming. "It feels good!"

Blue Ivy's grandma, Lawson, has been trying to tell people that Blue Ivy is a little version of her daughter for a while.

Last November, Lawson told Us Weekly that Blue Ivy has been performing "since birth" although she wasn't sure if she would make a career out of performing just yet.

"Whatever she wants to do, she will definitely be able to do it, because she's good at a lot of things," Lawson said.

Watching the behind the scenes footage in Homecoming was like watching Beyoncé and JAY-Z's home videos. It gave an intimate look inside their lives as parents, and it was so much fun to watch that.