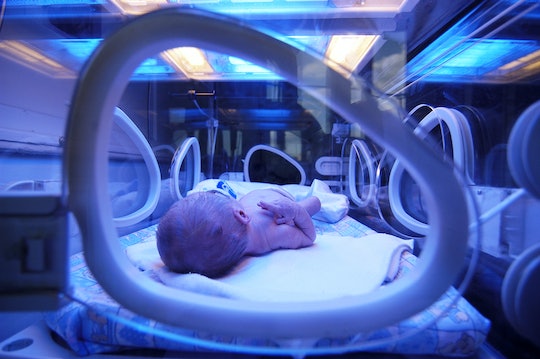 Beyoncé‘s Twins May Be Wearing These Special Glasses

Beyoncé's twins are here, and small tidbits about their short lives are starting to emerge. Recent reports have noted that the twins were born premature and have been "under the lights," meaning they're most likely being treated for jaundice which is caused by high bilirubin counts. It's not a very dangerous condition, but there are special things that the babies have to go through. Many times infants with high bilirubin wear these special glasses, that serve a special purpose.

The epic news of the twins arrival was announced over the weekend. According to People, Beyoncé went into labor earlier in the week, but it wasn't until Grandpa Mathew Knowles confirmed on social media that everyone knew for sure. Multiple sources have indicated that Beyoncé's babies were born pre-term, which happens a lot with multiples according to the American Pregnancy website. Babies who are born pre-term are also often born with jaundice.

According to the Mayo Clinic, jaundice is a pretty common condition, especially in babies born before 38 weeks gestation. Although jaundice is not usually very alarming, medical staff at hospitals typically use measures to get the bilirubin counts to go down. The most widely used treatment for newborns with jaundice is phototherapy. As explained on the MedLine Plus website, a child with jaundice will be placed under a light to help break down the bilirubin, a substance that is produced when the liver breaks down old red blood cells. The infant will be naked except for a diaper and special eye shades. There are a few different versions of the eye shades, but all are used to help protect the a newborn's eyes from the light. You may have seen some babies wearing eye patches as well, which serve the same purpose. A baby undergoing phototherapy may also have an intravenous (IV) line to keep fluids flowing.

According to the University of Michigan Children's Hospital, phototherapy can take a few days depending on how high the bilirubin levels are. Throughout the treatment, doctors take blood samples periodically to check on the progress. Typically mothers are still encouraged to breast feed every two to three hours (or feed however possible). Additionally, doctors may prescribe a biliblanket as an extra treatment or in place of traditional phototherapy. As explained on the aforementioned children's hospital website, a biliblanket is a pad of woven fibers that transports light directly to your baby's skin. Caregivers are able to diaper, clothe, hold, and even breastfeed with this blanket.

It's unclear where Beyoncé's babies are at in the phototherapy process and when they'll be ready to go home. The shades they're possibly wearing now won't need to be worn once they leave the hospital or at home. They're only for being "under the light" at the hospital to protect their eyes. It's probably safe to say, with stylish parents like the Carters, those babies will have lots of shades to wear of the non-medical variety very soon.