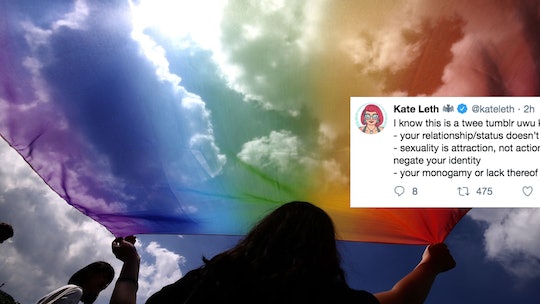 It might be the first day of fall, but it's also Bi Visibility Day, aka International Celebrate Bisexuality Day, an event that was first recognized in 1999 on Sept. 23. And in tribute to Bi Visibility Day 2019, here are 10 tweets that combat harmful stereotypes and promote equality for all.

Bi Visibility Day emphasizes change through attention to and celebration of the bisexual community. Together, people are called upon to break harmful stereotypes surrounding people who identify as bisexual, which is a very important cause. And although Sept. 23 is officially Bi Visibility Day, it also kicks off Bisexual Awareness Week, which ends on Sept. 27 with special events happening in every major city.

It goes without saying Bi Visibility Day is important, especially since a large of a segment of the population identifies as bi. In fact, about forty percent of the LBGT community identify as bisexual, according to The Pew Research Center.

And in case you don't know already, a person who identifies as bisexual is "someone who can be attracted to more than one gender," according to the Human Rights Campaign, which also recognizes that "adults and youth who identify as bisexual sometimes describe themselves differently."

Robyn Ochs, national speaker and award-winning activist, summed it up well, stating, according to Refinery29: "I call myself bisexual because I acknowledge that I have in myself the potential to be attracted - romantically and/or sexually - to people of more than one sex and/or gender, not necessarily at the same time, not necessarily in the same way, and not necessarily to the same degree."

Whether you identify as bisexual or know someone who does, there's a good chance you'll be inspired by these 10 tweets celebrating Bi Visibility Day, especially where it concerns combatting stereotypes.